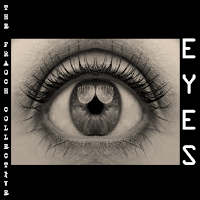 Band: The Fraoch Collective
Location: Long Island, New York
Country: USA
Genre: Alternative rock
Full Length: Eyes
Format: Digital
Label: Independent
Release date: February 29, 2020
What more can I say about The Fraoch Collective that I haven’t already indicated in my past reviews? I’ve said much to the effect that they’re the most original band to emerge from Long Island since 1993 and 1994, before LI and NYC lost its most important clubs and original music gave way to “tribute” bands. As they’re blasting holes in generic rock and garden variety pop, and giving new meaning to the term alternative, there is a dire need for them in today's music industry.
Like Patti Smith said when interviewed in Rolling Stone two days after CBGB was evicted: in the end its people and creativity that define music. And it wouldn’t surprise me the slightest bit if TFC’s vision caught on simply because it was unforeseen and hasn’t been tried before. There will always be artists who embody that principle, and that TFC can form out of nowhere and manifest the spirit of early New York punk bands is an important point to pay attention to.
My first impressions of their second full length, right from the beginning, is they’re writing songs that are even more despondent than their last go-around. “Cote du Rhone”, the opening track of “Eyes”, embraces such a prenotion of ill-fortune it can almost be likened to death-doom metal or depressive suicidal black metal bands, as much as early alternative bands. The song's conclusion is its most profound surprise, one I hadn’t expected to hear. All I can say is it concludes the song abruptly, trusting you into darkness and seclusion from which there is no return.
Indeed the entire album from that point takes unexpected turns, calling attention to Rolling Stones influence in “Dear Somebody”, underscoring mundane life with emotions far more secretive and shadowy in “Mice and Broken Things”, undermining the fleeting rays of hope it presents in “Hornsburg 49”. “No More Summers” sounds somewhat inspired by the same darkness that drove Type O Negative, heading into mesmerizing territory similar to late 60s Beatles.
“The Bay Song” is worth mentioning for its tribute to Metallica bassist Cliff Burton, as are “Sybille” and “The Judas Kiss (West Coast)” for the experimental turf those two songs head into. Altogether “Eyes” is proof that a band can branch out without completely changing or exhibiting a pretense to broad-mindedness. -Dave Wolff