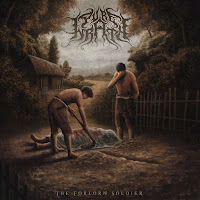 Band: Pure Wrath
Location: West Java
Country: Indonesia
Genre: Melancholic black metal
EP: The Forlorn Soldier
Format: Limited edition 10" vinyl, limited digipack MCD, special edition limited vinyl, digital
Label: Debemur Morti Productions
Release date: March 6, 2020
Cover painting by Aghy Purakusuma
Pure Wrath is a project fronted by the Indonesian songwriter and multi-instrumentalist Januaryo Hardy who has much experience from working with Bloodriven, Cadavoracity, Insolence, Lament, Perverted Dexterity, Urged, Excruciation, and Wept. Since starting Pure Wrath in 2014, he saw it grow from primitive black metal to something far more expressive, meaningful and engrossing.
Hardy’s last two albums “Ascetic Eventide” (2017) and “Sempiternal Wisdom” (2018) and the material he composed for his split with France’s Onirism, “Endless Journey” (2017), in the traditional spirit of black metal, are based on concepts relating to his home country’s cultural history. His new EP “The Forlorn Soldier”, a prelude of sorts to his next album, is his most musically and thematically ambitious work to date. Anyone who takes the time to listen to this EP and its message will come away with much to think about.
Hardy writes and arranges all of Pure Wrath’s material, and while listening you can’t help but distinguish how intensely his conviction shows. He can only express this conviction in the most unclouded way by handling those duties independently. As for how he pulls it off, you’ll find it almost impossible to believe Pure Wrath is a solo project since “The Forlorn Soldier” sounds like it was recorded by a ten-man band and several session musicians. Actually, only two session musicians are working with him, drummer Yurii Kononov and pianist Dice Midyanti. The wall of sound they create is loaded with subtle nuances designed to add fire to the coldness it evokes.
The concept of “The Forlorn Soldier” is based on a series of events that took place in Indonesia from 1965 to 1966, referred to as the Indonesian Communist Purge or Indonesian Politicide. These events were not as publicized as the Vietnam conflict, but nonetheless would have as significant an impact on the Cold War for years. One listener who appreciated this effort recommended watching the documentaries "The Act Of Killing" (2012) and "The Look Of Silence" (2014) to learn more about what happened during that time. As an aside, those documentaries were directed by filmmaker Joshua Oppenheimer whose grandfather escaped the Holocaust.
The three songs on “The Forlorn Soldier” sound like they were written to articulate the pain of the political purges, imprisonments, and massacres of that period, as well as the impact felt in the rest of the world. As a result, they are extremely similar to Norwegian black metal’s depiction of the religious purges in Scandinavia. This EP has the grandiose soundscapes, full-hearted vocals and emotive songwriting it needs to make the realism of those events clear. Adding anguished, grief-stricken piano and guitar interludes makes it a poignant EP that will provoke thought about the inhumanity of those events and the darker side of human nature in general. –Dave Wolff

Track list:
1. When a Great Man Dies
2. Children of the Homeland
3. With Their Names Engraved