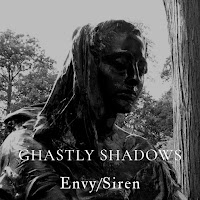 Band: Ghastly Shadows
Location: Boston, Massachusetts
Country: USA
Genre: Minimal darkwave
Single: Envy/Siren
Format: Digital
Label: Independent
Release date: April 5, 2019
“Envy/Siren” is the second official release from this Boston-based one man project fronted by John McLaren, following the debut single “Alone” which was released digitally in June 2018. Ghastly Shadows is a fairly new project of a couple years, and its Facebook, Youtube, Spotify and Bandcamp profiles offer little information on how McLaren got started or what he wants to achieve with it, so I’m basically doing this review from scratch. The first time I heard “Envy/Siren” I thought he was primarily doing a retro new wave project. That influence features prominently here, but after a few more listens the darker aspects of McLaren’s work are beginning to grow on me. To a certain point, “Envy/Siren” sounds like The Doors reborn as goth/darkwave, mostly because the keyboards introducing “Envy” somewhat re-interpret the keyboard intro to “Strange Days”. From there we hear a fair amount of build-up to a variety of electronic and atmospheric sounds with lyrical concepts of being trapped in a nightmare of solitude and emptiness accompanied by a deep desire to escape. The lyrics are what gripped me the most about this song, as they describe being locked inside a tomb of doubt while sleeping at night, and praying for death to come and grant release from slithering shadows and screaming voices from beyond. The lethargic tone in which McLaren puts these images across, reiterating them time and again, are even colder and darker than the music he composed for them. “Siren” takes a different tone, boasting images of unholy incantations and vows of revenge from the grave, presumably from a witch who lived many centuries ago whose soul is trapped in an endless abyss. Although it’s uncertain how this siren of the night departed from this mortal coil, we feel her longing to return as strongly as “Envy” conveyed a desire to escape to the other side. This song has a similar variety of sounds with driving percussion comparable to Sisters Of Mercy’s “Floodland” album. Strangely these two songs complement one another as if this single is about two souls who long to meet in this existence or the next. –Dave Wolff