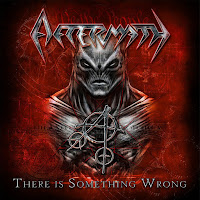 Band: AFTERMATH
Place of origin: Chicago, Illinois, USA
Genre: Thrash metal
Full Length: There Is Something Wrong
Label: Sleaszy Rider Records (Greece), Zoid Entertainment (USA)
Release date: March 15, 2019
To say “There Is Something Wrong” is politically charged is an understatement. Not a traditional thrash album, it’s a conceptual work of conspiracy theories, corporate and media indoctrination and rumors of secret societies. Look no further than Youtube for examples, from “Idiocracy” to “The Obama Deception” to commentaries like Jello Biafra’s “What Would Jello Do?” and Joe Pilato’s (R.I.P.) “Rave from the Cave.” Whether you accept or reject their opinions will depends on your own. But from what I read on social media the last election has led to massive divisions between Americans on almost every issue, and it’s harder to tell reality from reality TV. You don’t have to be a crackpot to see how much conflict there is in the U.S., let alone the world. This is the idea of Aftermath’s latest full length, their first since 1994 and their first new material since 2011 (barring their 2015 reissues of their demo "Killing the Future" and their full length "Eyes Of Tomorrow") The band doesn’t take a stand on any issue in particular, but it does represent a demand for the populace to wake up, refrain from watching TV and see through the tricks. As Jello Biafra said on a recent episode of his program, “sift through it all and decide what’s real.” The album is described on Worship Metal as being “bullish, belligerent and fueled by anger”; aggressive for the sake of making its point. I perceive it as aggressive, but more of a crossover of many genres with thrash metal being the canvas to paint each song on. It’s one of those albums with the artistic license to be the aural equivalent of a movie, like several other releases I’ve reviewed. I’m thinking of something between “Videodrome,” “Halloween III” and “Metallica: Through The Never” with a soundtrack added at the most surreal moments. Generally, “False Flag Flying,” “Diethanasia,” “Smash Reset Control,” “Gaslight,” “A Handful Of Dynamite,” “Temptation Overthrown” and “Pseudocide” rely as much on samples and spoken word passages as on the raw energy of old school thrash to formulate a theatrical apocalyptic album enhanced with electronica, early grunge, Voivod-esque progressive post-thrash and atmospheric music. There are more than enough new ideas to inspire you to think about where underground metal can go in the decade to come; at the least it will inspire you watch some of those videos appearing on Youtube and think about things. -Dave Wolff

Track list:
1. Can You Feel It?
2. False Flag Flying
3. Diethanasia
4. Scientists And Priest
5. Smash Reset Control
6. Gaslight
7. A Handful Of Dynamite
8. Temptation Overthrown
9. Pseudocide
10. There Is Something Wrong
11. Expulsion