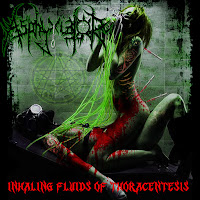 Inhaling Fluids of Thoracentesis
Eternal Eclipse
http://asphyxiator.bandcamp.com
http://www.facebook.com/AsphyxiatorSlam
For those into Brutal Death Metal and Grindcore be sure to check out Asphyxiator from Chicago Illinois. Formed in 2003 under the name “Gods of Gore & Brutality” they soon their name to Asphyxiator and released their first album entitled “Ex-Mortem Asphyxiation”. Ten years later and still going strong Asphyxiator released a new album entitled “Inhaling Fluids of Thoracentesis” under an independent label called Eternal Eclipse Records.
This album is everything you would expect from a band like this. It is technical, aggressive and intense in every way. Despite the programmed drums, the band still delivered in sound in other ways especially with the really thick and fast guitar work and sick vocals as well. Fans of bands such as Abominable Putridity, Jungle Rot, Terrorizer and Dead Infection should check these guys out because they are trying to keep this genre alive and doing it well. Most recently Asphyixator played at Full Terror Assault festival in Illinois and I hope to see more live performances from them and more studio work in the future. Check Asphyxiator out on Facebook and Bandcamp for more. -Michelle Liberati