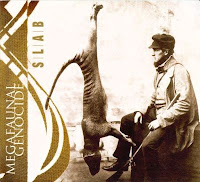 SLAB
Megafaunal Genocide
Independent
http://www.facebook.com/SLABofficial
Megafaunal Genocide is Slab’s second full length released in 2010, the follow up to 2007’s Betray The Past… Infect The Future. In 2014 their third full length Ten Human Jawbones was released independently, in digital format. The three musicians comprising Slab (guitarist/vocalist Jacob Cowing, bassist Jim Fletcher, drummer Andy Kimberley) are newcomers onto the Birmingham, UK scene (the same area that spawned Napalm Death). When looking them up on Encyclopedia Metallum I saw none of the founding member have played in bands previously and this is their first professional act. EM describes Slab as thrash-death crossover, but what was recorded here isn’t of the variety you’d have expected. This album sounds more in common with their own description on Facebook as progressive hardcore-thrash. Much of the material has a melodic death metal edge, but for the most part the progressive term fits them most. Perceptions should be skewed while listening to these songs since their arrangement and delivery are quite uncommon. The songwriting sounds mostly geared toward showcasing Cowing’s progressions and soloing. There is a sense of inventiveness to his work that people have to listen to closely to full appreciate. The band’s range in influence sounds slightly convoluted at first, but he manages to tighten them while the other members have opportunities to display their abilities. A few more listens and you begin to perceive the band’s originality more strongly. Bands like Exit 13 took extreme music in new directions that few if any had made an effort to tread. Here you’ll eventually get the same sense that Slab is making an effort to branch out. One of my favorite moments is the intro Vigil; while a brief instrumental it is somber and presents a fitting mood for the following songs. The lyrical concept and intended statement has something to do with how humans retained certain traits from their distant ancestors despite humanity’s gradual evolution from the animal kingdom. How this is evident from the disregard of animal rights some human beings display today. As Slab grows on you you’ll begin to see Megafaunal Genocide as a profound statement. -Dave Wolff
Posted by Dave Wolff at 8:38 PM