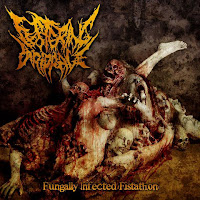 FESTERING DRIPPAGE
Fungally Infected Fistathon
Grindhead
http://www.facebook.com/FesteringDrippage
The band name, song titles and cover art promise an unforgettable slab of brutal death metal. Anyone versed in the genre will find a graphically descriptive cover enhances the listening experience (Cannibal Corpse is the most obvious example, though a multitude of other examples will also come to mind. When it comes to heaviness and brutality, this 2012 MCD doesn’t disappoint in that regard and this Australian band is determined to make an impression. The cover art mentioned above appears to have been painted and is a clear statement of what’s waiting inside. This and a 2010 demo are all that comprise their discography so far, with compilation and split releases including a four-CD compilation from Torn Flesh Records, Insufferable Noise. The mental pictures Festering Drippage summon are so clearly written they’re bound to attract the most hardcore death metallers of the Cannibal Corpse/Carcass variety. In these five tracks are verses so gruesome they’ll turn the stomachs of those less experienced in reading DM lyrics, which is arguably the point of creating a gore-soaked collection of songs such as this. Apart from the Deicide similarities (particularly in the vocals) this MCD is a memorable catalyst to spring the band into its own territory; they’ll reach it should they use their own license to expand on their style and compose and release material on a consistent basis. The lyrics are presented as narratives to classic gore flicks, and there is a sample sounding borrowed from a Jim Carrey movie to remind you not to take these songs to heart. -Dave Wolff