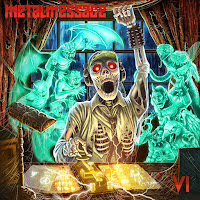 METALMESSAGE
VI
Metal Message PR
http://www.facebook.com/METALMESSAGE.PR
Strange start with the Morse language I could translate the second part only (“message”), so I guess it means Metal Message. At first, listening to the first track I imagined that strange things occurred like a zombie invasion and someone tried to send a message in Morse from a safe room. The general theme is of course Metal, each bands wanted to express with their own influences, many bands remind of classical underground bands. Most of them have been influenced by the 90’s, black metal/folk/Viking. When musicians really work together, you understand their emotions through the musical atmosphere they want you to feel. Those several bands I can mention are: Incursed, Morthus and of course Northland (which reminds more the traditional Viking folklore). Then, I recognized those who've been influenced by the heavy roots, like Vengeful Ghoul (imagining the scenic expressions between Lizzy Borden and Candlemass), it's a powerful stuff. Skyconqueror is also a terrible track which sounds really hard rock, with powerful vocals, typical, the kind of track you would listen to, riding your bike on an empty highway. I noticed a little of melancholy. Myrkgrav sounds typically Norwegian (by the way I thought it was, but I really don't know), not sure if it means Dark Tomb, and the title is about Pain, then I thought it was from Netherlands. I should ask them. Anyway: there's a strong melancholy with a powerful ride in a battle. Another track full of emotions, where everything sticks together. Most of the bands are good, especially if they work very hard: there's no secret about it. I also don't know if those are independent, but most of them deserve to go higher on stage. Some tracks are musically and technically great, some vocalists are not (and I won't mention them) but they need to work more because they are on the right way, they should not try to imitate, they should be themselves and be less shy and please accept your voice as it is, just don't ever think "my voice is not that cool" (I was the same when I sang for the first time). Our voice is our first music instrument, we know it well, we know the different expressions it say and sing. Think about the right breathing to succeed perfectly: singing starts in your guts, not in your throat. I learnt it, I know I would be able nowadays. Some of you are great musicians, the more difficult are always the vocals. I know how difficult it is, most of the people always think it's too easy to sing: it's wrong, it's technically very hard, it's all about listening, feeling, an bring both from your guts to your throat, I don't know the correct word for it but in French we say "Lâcher-prise" like "let-it-go". And if you control your breath from your belly to your throat then you will sound better, it's the most difficult technique in the beginning. SO, after having listened to the whole tracks, the Metal Message is clear: go ahead, continue to work hard for things you like, enjoy and raise your fist and howl the fuck out loud. -Abyss Forgottentomb