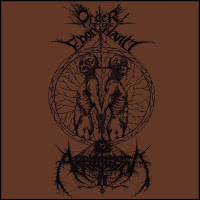 ORDER OF THE EBON HAND/AKROTHEISM
Behold The Sign Of A New Era/Generation Of Vipers
Ewiges Eis
http://www.facebook.com/eerec
http://www.facebook.com/OrderoftheEbonHand666
http://www.facebook.com/Akrotheism
This is a two song split released in 2013, featuring two mind blowing Greek black metal bands. Some background information: Order Of The Ebon Hand from Athens and Attica formed in 1994 and have released material off and on since ‘97. Their main discography is two full lengths (The Mystic Path To The Netherworld, XV: The Devil) and a split of Bathory covers with Macabre Omen (Two Years Standing Proud In Valhalla). They appeared on the seven inch EP Tribute To Bathory (Necroterror) and three compilations: Hellas Salutes The Vikings (Metal Invader), Order Of The Tyrants (Season Of Mist), Hellas: The Black Death Anthology 1989-2006 (Kyrck Productions/Armour). Their lyrics center on dark mysticism and their name was inspired by the game Magic: The Gathering. Akrotheism is a newer band, having formed in 2012 by former members of Astral Aeon after they disbanded. This spilt was their first time appearing on record; they followed this appearance with the full length Behold The Son Of Plagues (Odium) and a split release with Septuagint, Sphinx: The Great Enigma Of Times (Forever Plagued). This band writes about orthodox Satanism, esotericism, nihilism and human decadence, and like Order Of The Ebon Hand they write music that complements their lyrics. These two songs are raw, abrasive, hateful, pounding, uncompromising cult black metal that doesn’t let up for a single moment. There are major differences between these bands; the song by Order is heavily enhanced with keyboards and Akrotheism include theatrical breaks that offer a visual picture of what their song is about. But both bands are equally promising and my only complaint is that I didn’t get to hear more of them, I strongly recommend checking them out on Facebook and other social media sites where you can hear their work. -Dave Wolff

Track list:
1. Order of the Ebon Hand - Behold the Sign of a New Era
2. Akrotheism - Generation of Vipers