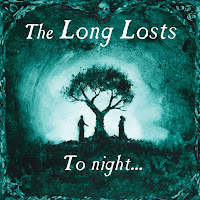 THE LONG LOSTS
To night…
Independent
Release date: October 1, 2017
There is a new voice in punk and gothic music, thanks to this New York City based duo. The Long Losts were formed in 2012 by Anka and Patrick who compose songs inspired by their mutual devotion, the intrinsic grace and refinement of the season between summer and winter when nature prepares for slumber, and the one night when the barriers between worlds is at its most translucent. Their two full length releases Scary Songs To Play In The Dark and To night…, available for streaming at their Bandcamp profile, are statements that goth is more than wearing black, worshiping the devil and telling everyone to fuck off, as many superficially presume about the lifestyle. Much of the most picturesque, visionary, mournfully dramatic music I have heard came from goth culture (bands like Voltaire, Dead Can Dance, London After Midnight, Sisters Of Mercy) and anyone who has been part of it for a long time will tell you it has more to offer than you would expect. A theatrical ambience runs through their albums adding color and texture to their songwriting, making the songs feel like narratives. The Girl With The Haunted House Tattoo, To Be Like Lily (an ode to The Munsters) and I Love Him For His Horror Movies are fine examples from their debut. If you ever wondered how Blondie and Bauhaus would have sounded if they collaborated it may have sounded something like Scary Songs To Play In The Dark. There the duo evince commercial potential without trying to brighten their instrumentality. Three years between their debut and their latest effort To night… gave them more than sufficient time to increase their histrionics to directly involve the listener. This is perceptible in Big Dark Room, To____, Baby Fangs, Your Grave Eyes, Tonight and One Night At A Time. In those songs Anka and Patrick (joined by bassist Bret Calder and drummer Brian Shonen) are introducing you personally to the horror they capture on paper and the warmth to be found in mutual solitude. Their straightforward openness makes the visuals of cemeteries, haunted houses and monsters all the more tangible. The Blondie and Bauhaus influence is still present; you can add Sonic Youth and Diamanda Galas in some places. Anka in particular has been compared to Siouxsie but it sounds like she has been finding her own voice since the beginning. You might want to consider adding The Long Losts to your next Halloween mix as anything from either of their albums would work alongside songs by any other goth band. While you're at it check out their videos on Youtube. -Dave Wolff