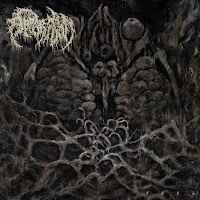 Band: Apparition
Location: Los Angeles, California
Country: USA
Genre: Death metal
Full Length: Feel
Format: Digital album, compact disc
Label: Profound Lore Records (Kitchener, Ontario, Canada)
Release date: October 22, 2021
Something I tend to think about often is, ‘How can we create emotional responses based on sound?’ As in when you think about ’A masked man breaking into your home and you being left helpless to stop the attack’ that’s normally a very clear VISUAL’ to attain.
But sonically? Is it possible to create that same level of fear and paranoia using solely just music. We test those boundaries here on this album appropriately titled
-FEEL by APPARITON
So, this is the latest release by the band. 6 new tracks by this Death Metal outfit. A band I haven’t had any experience with prior to this review but the genre was laid out from and centre and so I had a base line ‘idea’ of what to work with and if my introduction was anything to go by then this band has unlocked the rare ability of unlocking the dark corners of one’s imagination.
Let’s talk production for a bit, because what these guys bring to the table is a darker, gloomier approach to the traditional Death Metal sound. It’s as if Death Metal itself had gotten depressed and found itself into a rock bottom state and has festered into this undeniable monster that was already a problem but with this added dose of darkness has become indestructible and more dangerous than ever.
The whole time I was listening to those 6 tracks it felt like I was warped into madness, the emotional state was rattled by the constant use of brooding instrumentation, the heaviest of guitar riffs, the thrashing of the drums, the bass oozing out ready to pounce at any moment, it’s truly a surreal experience!
The vocals are also just as malicious as the sounds swamping it. Imagine a serial killer in their safest room, their calmest state and ready to be unleashed. This is how I feel listening to this man’s vocals, on edge isn’t the right way to describe this or should I say not a strong enough word for it, the unsettling nature of the screams and growls leaves nothing but horror to the minds and imagination of the listener.
6 tracks may not sound like a lot, but in comparison to the anguish and mortal despair one will feel traveling through the underworld that is ‘FEEL’ it will feel like a lifetime.
If you think you are brave, then please step in and see how you go, test your instincts, challenge your SURVIVAL. –Corban Skipwith
Track list:
1. Unequilibrium
2. Drowning In The Stream Of Consciousness
3. Nonlocality
4. Perpetually Altered
5. Entanglement
6. Feel
This review can also be read at Corban Skipwith's Facebook group Relentless Reviews with Corbz. -DW
Posted by Dave Wolff at 1:26 AM