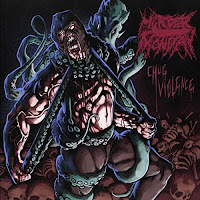 Band: Murder Monday
Location: Meriden, Connecticut
Country: USA
Genre: Heavy metal, powerviolence
Full Length: Chug Violence
Format: Digital, streaming
Label: Independent
Release date: 2021
You know, sometimes in music you’ll find an artist (or in this case a band) will focus all their efforts and energy into a single act or feeling or emotion.
Different then say a conceptual idea for an album as a whole but more a focus on how and where you want your album to go and today the key word we will be focusing on is
-AGGRESSION
Murder Monday (Chug Violence)
So this is the latest album by the band Murder MONDAY who present to us 7 new deadly tracks to sink our teeth into it.
As I stated before above this album to me is always focused heavily on the idea and use of *Aggression* as a means to an end, whether that be
-How the album sounds as a whole
-How the vocalist projects his vocals
-How the overall aesthetic feels and is experienced by the listener.
To me it all pours into aggression and you can feel it!
As a collection of tracks these songs feel ruthless, they feel unforgiving and purposefully angry to the point of no return. They want you to experience the rage they feel and so they’ve found a way to steer the songs and production into one single relating factor and uses that ‘home point’ as a way to always centre their work around it.
Whether you’re talking about how aggressive the instrumentation is from those thrashing guitar patterns, the devilish nature of the drums or the sickening wave of the bass everywhere you turn it’s just more motive discovered for *Aggression*.
To me this isn’t a bad concept if done correctly, see there are countless of artists/bands who attempt to have a record portray a single emotional/mental narrative but fall short because they don’t stick to the ‘home point’ and tend to frequently deviate from the path of which they are trying to steer towards.
That’s like if an album tries to be purposely ‘sad’ or ‘depressing’ and only 3-4 songs out of 10 are acoustic and heartfelt while the other 6-7 are traditional bangers and radio style hits then it just takes all the substance of what you were trying to go for in the first place!
The point I’m trying to make is this, if you’re looking to make an album that’s focused on a single point then take these guys as a fine example! Every song, every note played, every word screamed is all AGGRESSIVE which obviously in turn means the album will focus solely on *AGGRESSION* and it’s done well!
Go check this album out, I personally think it will rock your world from the outside in! Go support their social media and most importantly as always
SHARE. SHARE. SHARE! -Corban Skipwith
Track list:
1. Betrayal
2. Shovel
3. Decay
4. Wake Up
5. Bloodbath
6. Kill Party
7. Terrorizer
This review can also be read at Corban Skipwith's Facebook group Relentless Reviews with Corbz. -DW
Posted by Dave Wolff at 7:17 PM