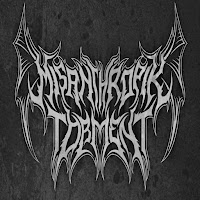 Band: Misanthropik Torment
Location: Lexington, Kentucky
Country: USA
Genre: Blackened death metal
Track: The Blueprint Façade
From their full length “Rebell Against The Establishment Power Belongs To The People”, released December 12, 2020
Format: Digital track
Label: Misanthropik Records
What does freedom of speech mean to you? Is it something you take for granted? Does it mean say whatever you want to whoever you want just because you can?
Or is it a tool to help express and voice opinions that the majority don’t want to hear and are afraid to speak about? If there’s one thing I respect most about Misanthropik Torment Band it’s their constant middle finger to the world.
This is a single from two years ago by the band Misanthropik Torment a band I’ve been very close with over the past few years and a band that is as passionate as can be about music and especially metal!
What we have here is a special 8 minute track that centres around
-Distrust
-Anger
-Injustice
-Torment
To me this track embodies perfectly the growing frustrations and misconducts by not only local governments and corporations but society as a whole.
The production on this track is more ‘glossy’ the most with this nice almost synth quality to it making it feel like a song worthy of being played in stadiums!
Imagine if Queen went Political and Extreme Metal and this is what I would imagine they would sound like.
The vocals on here feature 90% heavy death growls and screams and 10% clean which I have to say I love the clean work because it’s all of Erik’s (the lead singer) emotion spilling out into each lyric screamed or sung and you can hear it!
If I had to describe the sound it would be a combination of David Bowie’s unorthodox signing style paired with Marilyn Manson’s dark and perverse nature of tone and then sprinkled on top is a dash of Billy Joel’s charisma for garnish!
What I feel really stands the tallest for this track is the lyrics, because as you will know it’s not easy to pull off an engaging 8+ minute track. There are so many things that have to be considered in order to pull it off and I feel the strength and intimacy of the lyrics is what drives half the work.
The lyrics are on the YouTube info the link is down below and please if you haven’t already go check this song out and subscribe to not only their YouTube but their social media as well!
A new age of Metal is coming and trust me you’ll want to be here for it, Misanthropik Torment to those who don’t! -Corban Skipwith
Lineup:
Erick Leviathan: Vocals
Josh Freeman: Guitars
James Pasini: Bass
Hector (The Beast): Drums
This review can also be read at Corban Skipwith's Facebook group Relentless Reviews with Corbz. -DW
Posted by Dave Wolff at 2:29 PM