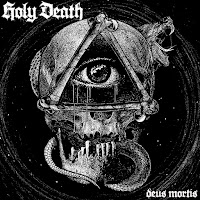 Band: Holy Death
Location: Los Angeles, California
Country: USA
Genre: Death/doom metal
EP: Deus Mortis
Format: Digital, limited edition vinyl, cassette (sold out)
Label: Seeing Red Records
Release date: October 30, 2020
Today, I want to discuss with you all a very tragic EP, one in which it’s whole existence is brought forth due to pain, suffering and ‘death’ and today you will be able to hear how devastating tragedy sounds on a record. Holy Death with ‘Deus Mortis’ So this is the October 2020 release by the band featuring a track list of four songs plus an Entombed cover.
In the description for this band it states that the lead singer had a near-death experience and which led him into the creation of this band, and has apparently lost several family members since, which is a pain no one should have to suffer. But in doing so he has unleashed into this world a series of tracks that feel absolutely soul crushing and detrimental from start to finish, a collection of songs that go past any emotional barrier or sense of ‘appropriation’. This is just pure, raw, animalistic emotional vulnerability over instrumentation and it’s one of the most mesmerizing thing I’ve ever heard.
The production itself gives a strong combination of Doom/Sludge with those slow, methodical pacing of the music combined with those heavy, sluggish guitar riffs and precise drum patterns to really hammer in the intensity provided on the songs. I can’t stress this enough, the sonic aggression provided to us is something I haven’t heard in a really long time. This is real, heartfelt pain expressed here, not just put on for the sake of ‘Metal’ or ‘Being Brutal’. No this is genuine sorrow expressed, and when you hear the real thing, no matter what you're used to hearing, you can recognize it right away.
The only album I could really compare this to (authenticity-wise) is the album IOWA by Slipknot. How rumour goes they were all at the rock bottom of their lives, Corey convinced them all to stay and record their animosity, and how that album became one of their most infamous records for that reason!
The same applies to this! Even though it’s only five tracks it won’t be for the weak of heart and don’t think just because you're used to heavy styles of music that this will be a cakewalk. Because when you step into this record you're walking into the real thing and sometimes the real thing can bite back.
What an astonishing effort on this one, I always take my hat off to those rare few who decide to unleash their anger and sorrow on to an album for the world to feel, it obviously can’t be easy but if the desired result was to have us all feel the pain, then message received.
Link is down below, go support this band and feel the incredible aura this record produces! –Corban Skipwith
https://holydeathdoom.bandcamp.com/album/deus-mortis
Lineup:
Torie: Vocals, guitar
Aspen: Bass
Stephen: Drums
Track list:
1. Ritualistic Pain
2. Spiritual Degradation
3. Deus Mortis
4. A Crown Grows out ov His Head
5. Wolverine Blues (Entombed cover)
This review can also be read at Corban Skipwith's Facebook group Relentless Reviews with Corbz. -DW
Posted by Dave Wolff at 6:27 PM