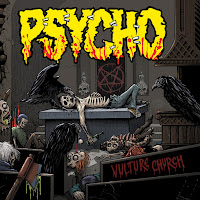 Band: Psycho
Location: Boston. Massachusetts
Country: USA
Genre: Punk/grindcore
Full Length: Vulture Church
Format: Digital album, compact disc
Label: Selfmadegod Records (Poland)
Release date: September 24, 2021
Wow, this week must be PUNK WEEK! I swear in one way or another I’ve only reviewed Punk albums all week! But hey not complaining!!
Vulture Church by PSYCHO
So welcome back to another review! Where this file we will be tackling the crazy project by the legendary underground Punk/Grindcore group from Boston PSYCHO with their new album featuring 18 new tracks to dissect!
Firstly, the main thing find interesting about this album is although it’s extreme in nature (and trust me, it is on the furthest end of the spectrum!) it’s not ‘heavy’ in sound if that makes any sense? For example it’s not like the band KEN mode that utilizes a more ‘Deathcore’ mixed with Punk sound (at least on their album LOVED) and that variety has its lovers and haters.
But none the less, if I had to think off the top of my head a project this can be similar to it would have to be Black Flag’s album ‘Family Man’ in how extreme the narrative is, the lyrics, the focus and the aesthetic as a whole!
I mean when it comes to this album you can tell just by the track titles! You’ve got songs like
-Cancercunt
-Animal Boy
-Transvaginal Mess and many more to put worry into anyone who isn’t already familiar with the style of music.
But as any Punk band worth their salt they have the classic trademarks that make you know their a Punk band such as
-The use of slap stick voice and sound samples
-The short length of songs
-The small but explosive nature of the tracks
Anyone who listens to Punk knows what I’m talking about with these, every album back in the day had them and I guess they are just following suit! Which isn’t a bad thing at all!
When I was listening to this album I felt the aggravation, the aggression and the maniac nature of the band and with so many decades of experience mastering this art over the years they are sure to bring a perfected sound that kicks ass.
Actually I was playing a competitive wrestling match with The Rock in WWE 2K16 and it was insane how hard that match was so this album helped a lot in providing me the energy haha.
Anyway, enough about me. This album is any Metal fan’s desire and any Punk rocker’s fantasy! It’s ridiculously fast paced and in your face ready to kick your teeth out if you’re not ready to handle the aura that is ‘PSYCHO!’ –Corban Skipwith
Lineup:
Johnny X: Guitar, vocals
Mike: Bass, vocals
Charlie Infection: Drums, vocals
Track list:
1. South Of The Border
2. Drive 3
3. Stressed Out
4. Animal Boy
5. Bleeding Out
6. Vulture Church
7. Life Lost
8. Dead On A Mountain
9. Name Dropper
10. Transvaginal Mess
11. Slave
12. Rock Opera
13. Louder Than God
14. Sever The Sist
15. U.K. Joogler
16. Eye Of The Storm
17. Uncle Buff
18. Cancercunt
This review can also be read at Corban Skipwith's Facebook group Relentless Reviews with Corbz. -DW
Posted by Dave Wolff at 2:17 PM