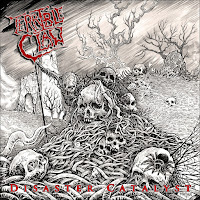 Band: Terrible Claw
Country: United Kingdom
Genre: Death/thrash metal
Full Length: Disaster Catalyst
Format: Digital album
Label: Independent
Release date: August 11, 2021
You know I’ve seen some pretty crazy ‘Claws’ in my day.
-The Mandible Claw (Mr. Socko)
-The Giant Claw (The Great Khali)
HackSAW Jim Duggan.
But none have been as insane or as powerful as THE TERRIBLE CLAW and their new heel theme ‘Disaster Catalyst’
So this is the returning debut of The Terrible Claw’s second album, with 10 new songs in their moveset they are ready to fight.
Representing the group we have Veteran Older brother ‘Death Metal’ along side him is the gifted and full of potential Young brother ‘Thrash Metal’ and together they make for an unstoppable duo!
The match begins and it’s obvious who the main attraction is going to be this evening it’s the Veteran Older Brother ‘Death'.
Well that’s right brother, what’s clear to the audience is the level of impact, input and initiatives shown by Death, he’s always making himself present, taking control of the structure of the match and even when not the one in the ring his presence can be felt.
You hit the nail on the head with that, although not to take away from the younger brother ‘Thrash’ he does an excellent job with the moves and opportunities he’s given, as I said earlier he’s going and full of potential! Any time he’s been in the squared circle so far he’s been dominating with those shredding guitar riffs, those groovy almost ‘Prog’ like patterns, the technically behind his moves are out of this world!
Yeah brother, I see what you mean but for me it’s the impressive foot work on the drums! I mean listen to those kicks and snares? We are hearing the same album aren’t we? The tempo speeds are off the hook, I can’t believe he has this much stamina still left in the tank after all that!
No doubt about that, but oh wait as per usual here comes Death back into things, just as we talked about before Death is always lurking! You can always feel those animalistic death growls howling at you.
Ah! Scary indeed brother, sheesh I wouldn’t want to be on the receiving end of those.
Yes, thank you for the interruption but you are right those heavy guitar layering combined with those sadistic drums, I mean he may not be as quick as young brother ‘Thrash’ but boy does he pack a powerful punchline.
The match is over and no surprise there. Although the silence and brain activity did put up a fight, in the end the Metal always wins and in this case the fans were lucky enough to see the most powerhouse team in the industry.
They are bold, aggressive, nasty and brutal.
But at the same time, fast, technical, groovy and refreshing.
Those 10 new moves serve them well, and for those of you watching at home, I dare you to challenge this group if you think your ‘too good to listen’ I guarantee you the Metal will win every time! –Corban Skipwith
Track list:
1. Self Sabotage Continuum
2. At Any Cost
3. Sleepwalking into Oblivion
4. Dysfunction and Disillusion
5. Hive Mind
6. Pyrrhic
7. Fear of Reprisal
8. Arrogance Incarnate
9. The Wilful Ignorant
10. Insufferable Existence
This review can also be read at Corban Skipwith's Facebook group Relentless Reviews with Corbz. -DW
Posted by Dave Wolff at 10:51 PM