Single/Video Review: Cadaveria "The Woman Who Fell to Earth" by Dave Wolff 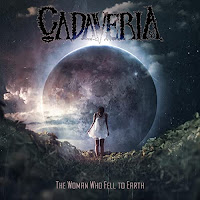 Band: Cadaveria
Location: Biella, Piedmont
Country: Italy
Genre: Black/gothic metal
Single/Video: The Woman Who Fell to Earth
Format: Digital
Release date: June 1, 2021
I still remember Cadaveria when she was the frontwoman of the Italian goth-death-doom-black metal act Opera IX from 1992 to 2001. “The Black Opera: Symphoniae Mysteriorum in Laudem Tenebrarum” was one of the albums I listened to often in the late 90s, so naturally I was interested in learning more when I got wind of her new black/goth metal band.
Cadaveria sounds like the logical progression from her work with Opera IX, particularly with cleaner production and greater vocal range. Though occult and witchcraft based lyrics are something those bands have in common, Opera IX leaned closer toward black magic and dark paganism while Cadaveria’s lyrics are more personal, especially when it comes to thoughts of mortality.
Her personal theme resonates in Cadaveria’s latest promotional video “The Woman Who Fell To Earth”, which includes a thought out story that’s highly spiritual as well as introspective. It refines time tested concepts related to black metal, concepts involving the cosmos and earth’s pagan past, and shows them in a different light without letting them lose their edge.
The concept of “The Woman Who Fell to Earth” involves a woman, possibly some spirit, who arrives on earth from parts unknown, possibly a parallel dimension, seemingly to reunite with her earthbound essence and return it to life after ages have passed. I say this loosely because there are unanswered questions left open to interpretation. For some reason I felt compelled to watch Cadaveria’s previous videos, “Shamanic Path”, “Divination”, “Matryoshcada” and “Return” (originally by Deine Lakaien).
I guessed these videos follow a narrative of sorts, at least a loose narrative, about a woman reborn of the earth whose return was brought about by ancient and forbidden pagan/shamanic rituals. Her purpose to heal a sick world made corrupt by human greed and lack of understanding of a “bigger picture”, one she is eager to teach again.
I don’t presume to say this is what Cadaveria had in mind, but using my imagination it seemed those videos compile a story, or could compile a story, that jibes well with “Woman”. The imagery presented in those short films seems to reveal key moments in the mysterious earth mother’s tale. Plus the notion that while her legend is perceived as evil, she is nonetheless a force for good. This was partly on the spot, as all those songs are connected to events in Cadaveria's personal life.
I also watched a mini-documentary on Cadaveria’s Youtube profile explaining the concept of each song and the clips made to promote them. Cadaveria and Marçelo Santos of Morbid Vision discuss the ideas they shared during their collaboration. Duality, rebirth, divination, nature, and tribal beliefs and practices are the themes of the first four promotional videos.
All this seems to culminate in the imagery created for “Woman”, which was likewise directed by Marçelo Santos of Morbid Vision. Within the framework of the darker subgenres of metal, it turns all preconceptions on their heads as it represents purification of the earth and the possibility for renewal of nature and thus humanity. Hardly a negative outcome for the world.
The video for “Woman” depicts the arrival of this visitor from distant space, and her disorientation as she absorbs her new surroundings as she takes a journey to understand her purpose. Without additional commentary, I gather the imagery is symbolic of a personal journey into heightened states of awareness of what the human soul can become. I’d suggest watching all five videos back to back to appreciate the shared vision between them. –Dave Wolff
Lineup:
Cadaveria: Vocals
Kris Laurent: Guitars
Peter Dayton: Bass
Marçelo Santos: Drums
Posted by Dave Wolff at 6:53 AM