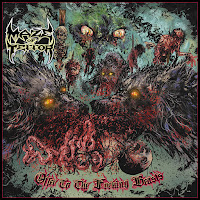 Band: Maze Of Terror
Location: Lima
Country: Peru
Genre: Thrash metal
Full Length: Offer To The Fucking Beasts
Format: CD, digital
Label: The Orchard Music, Xtreem Music
Release date: August 26, 2021
Review Time!
First of all, just for the record. Can you imagine anything more terrifying than a ‘Maze Of Terror?’ I can’t! That sounds horrible. A maze is already hard enough, make it a terror maze? That’s the end. Today’s review will be the 2021 album by the band, ‘Offer To The Fucking Beasts’.
This album has ten tracks of some of the grooviest metal songs I’ve heard in years! To me this sounds like ‘Pantera meets Metallica’ Groove Metal combined with the prime era Thrash and you got a deliciously funk recipe for a fantastic album.
First off, the production is TO.DIE.FOR as I spoke about above this combined so many elements of Groove and Thrash, with the fast-paced instrumentation hitting harder than Mike Tyson on Cocaine.
You’ve got those groovy, catchy, and technical guitar riffs and drum patterns that become so bloody funky that they would put George Clinton to shame.
I couldn’t help while listening to this to just break out and dance/head bob in the middle of the street. I had this swagger in my step, doing air guitars and air drums without a care in the world, the Thrash would spin me into this loop, it was awesome. You won’t find a more enjoyable time anywhere else!
Then you have your vocals. Which are a lot heavier than the production choices which I suppose would give a great contrast to the sonic elements, makes it a more unique experience.
Anyway, the vocals remind me strongly of a band like Nails. With that extreme punk on steroids grudge to his voice and noise projections, he sounds like the perfect wild man and along with that amazing production, it’s not hard to see why or how he can pull off the insanity.
All in all, this is a great album. I feel like words like ‘great’ aren’t used anymore and replaced with the WAY too overused compliments such as ‘Perfect, Immaculate, Amazing’ etc. but to me (although really good can be accurately summoned up as ‘Great’.
Everything about it is great, from the smart execution of the sonic aesthetic and production to make it feel as colourful and ‘alive’ as it did. To the vocal performances that brought out those ‘animalistic’ tendencies inside all of us to pop out and rock out to the album, it was a really smart move to contradict the other elements and I honestly can’t get enough.
Go support them down below and feel the magic! –Corban Skipwith
Lineup:
Leviathan: Bass and Vocals
Criminal: Guitars
Hammer: Drums
Gabrihell Riotor: Guest guitar solo on “No Requien for the Unborn”
Track list:
1. Priest of the Ancient Ones
2. Blessed by Sickness and Death
3. Angels of Acid
4. Blood Horror Cult
5. Death by Fire
6. A Millions Kills
7. Destroy and Control Starbeast
8. No Requien for the Unborn
9. Shub Niggurath Awakes
This review can also be read at Corban Skipwith's Facebook group Relentless Reviews With Corbz. -DW
Posted by Dave Wolff at 6:30 PM