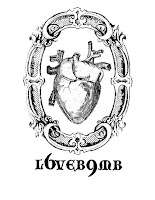 LOVE BOMB 69
Self-titled
Independent
http://www.facebook.com/Lovebomb69
Garage punk from another section of NYC that hasn’t been gentrified. You heard about Quality Of Life; this is what a friend once described as “the quality of low life.” The three tracks Lovebomb 69 recorded for this MCD are a fusion of Sonic Youth and Teenage Jesus & The Jerks. The tracks are somewhat repetitive occasionally, but with street level dissonant rawness they definitely exhibit a shade or two of the early days of CBGB and Max’s Kansas City. That time period is relegated to history and punk has branched out significantly since then, but something about the production is gritty and honest. It still presents a more accurate picture than the film made about CBs in 2013 (a paint by numbers outing that leaves out important points of its history including the hardcore matinees and the first time bands like AC/DC, Misfits, Bad Brains and Motorhead played there). Back to the MCD, there are moments where I was also reminded of Ramones and Blondie. Two of the tracks (Boy and Sex Generation, loosely based on The Who’s anthem My Generation) can be streamed on LB69’s Facebook profile. A few videos can be viewed there and on the Youtube profile of producer Damian Panitz who mailed me my copy a while back (there are also a few bootlegged clips I came across while surfing Youtube for them). The band’s last announced live shows were in 2013 so you’d have to ask Damian if they’re still active today. -Dave Wolff