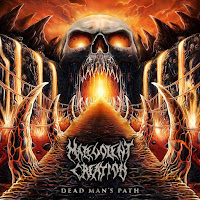 MALEVOLENT CREATION
Dead Man’s Path
Century Media
http://www.facebook.com/malevolentcreation
Malevolent Creation is back this month and is living up to their name like they usually do. Being an influential death metal band from the 1980’s it is accurate to say they are a classic.
The first track of the album “Dead Man’s Path” is a bit slow and doomy and a little bit off of what they usually bring to us, but from the second track on they leave us with no surprise as they completely blast off and get more energetic. The first half of the album really has great lead work and the drummer fits into well. It is very speedy in some parts and has nice riffing to go along with it.
The second half of the album is both brutal and brilliant; blast it too loud you might just actually blow your speakers. It is very focused throughout and gives an old school feeling both instrumentally, through the vocals and the lyrics. The last track “Face Your Fear” is a great way to end this album with the continuous pace.
The way to put it is if you are a Death Metal fan that is not into the real technical sounding stuff be sure to pick up this album via Century Media Records available both on CD and LP formats. -Michelle Liberati