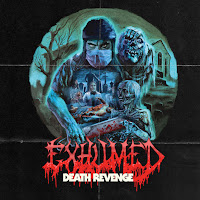 EXHUMED
Death Revenge
Relapse Records
Release Date: October 13, 2017
The metal opera has existed since King Diamond’s classics Fatal Portrait, Abigail and Them were released in the 80s.Then there was Operation: Mindcrime from Queensryche which opened doorways for bands to pass through in the 90s, 2000s and 2010s. This is not even counting the demos released by the Long Island thrashers Maelstrom, the concept of which was reawakened when they reformed in the 2000s. I’m sure there were others by local bands here and there. Back then the idea was in its infancy and there was unlimited ground to cover. I’ve heard many greats since then (the most recent being Zornheym’s Where Hatred Dwells and Darkness Reigns), but with the exception of bands like Nile I’ve heard few from death metal bands. Well here’s one death metal band that proves their capability to create a concept album of their own. I just heard about Exhumed’s new album from Alan Lisanti, and getting wind of it was manna from hell. “And they say Death Metal is dumb,” he writes on Facebook. “[The band] is over here turning classic literature into a magnum opus of death. Give it twenty years and all the hipsters will love it.” The hipsters can wait that long if they want. As the California death metal band’s first attempt at doing a concept album, Death Revenge has creative and historical merit in equal parts and clearly a great deal of painstaking research went into the conceptual theme and the lyrics. If you don’t know of the band they play old school melodic death metal reeking of Unleashed, Obituary and Hypocrisy, with shades of Slayer and Venom, guaranteed to make your ears bleed. The storyline takes place in the early nineteenth century and is based on a gruesome practice that from what I understand was commonplace. For clarification of what I’m referring to I’d suggest watching the movie Gangs Of New York, particularly the scene where Amsterdam and his friends raid the ship in the harbor. According to legend this practice happened in Scotland as well as old New York, and the Scottish city of Endinburg is where the narrative of Death Revenge takes place. It’s being called an ambitious work by Exhumed’s label Relapse Records. Divided into thirteen chapters, it has members of the band personifying different characters, pushing Death Revenge closer to death metal opera. Giving it more of a horrific edge is that it’s based on actual historical events, adding reality to the gore soaked brutality of the soundtrack. I should mention the classical pieces adding weight to the album’s conceptual theme and reinforcing the notion that this is an effort on the band’s part to branch out on their own terms. If anything, even if you don’t like death metal, the possibilities presented is endless since there are many historical themes bands of all subgenres can explore. On many levels Relapse has a real winner on their hands. Exhumed has two promotional videos made for Death Revenge, and both can be viewed at the album’s Bandcamp link. And check out the bonus Exodus cover at the end. -Dave Wolff