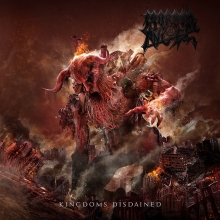 MORBID ANGEL
Kingdoms Disdained
Silver Lining Music (USA)
JVC (Japan)
Release Date: December 1, 2017
The word “legendary” is often used to describe bands who have had a lasting effect on popular culture, underground and aboveground. Since Morbid Angel started quietly around 1983, made a name for themselves releasing a few demos through the decade and began their rise to prominence in 1989 with Altars Of Madness, that word fits them for influencing death metal to the present day, and standing out from the immeasurable number of bands appearing on social media in the 2010s. Despite fan disappointment with their last album Illud Divinum Insanus and it’s industrial approach, the new full length Kingdoms Disdained heralds the return of bassist/vocalist Steve Tucker who we last heard on 2003’s Heretic. Without delving into industrial experimentation, it’s a return to form for fans who remember Covenant, Domination and Formulas Fatal To The Flesh. There are also similarities to the slower approach the band took on Blessed Are The Sick. Before the new album’s release two advance tracks were previewed by Revolver Magazine, namely Piles Of Little Arms and For No Master. These previews reaffirmed Morbid Angel’s DM origins, making it clear they were returning to doing what they do best. From the first notes onward you know what to expect as a fan. Trey Azagthoth’s guitars remain precise, chaotic and innovational, Steve Tucker remains a worthy successor to David Vincent, and musician/producer Erik Rutan (Hate Eternal) who helmed the album at St. Petersburg, Florida’s Mana Recording can still magnify the band’s expertise. I can also say that new drummer Scott Fuller (Annihilated, ex-Sentinel Beast, ex-Havok) more than admirably fills the void left by Pete Sandoval and Tim Yeung (ex-Pestilence, ex-Nile, ex-Hate Eternal). I found it particularly impressive how the band eased back into their traditional style without exerting too much effort and without making it sound like they were trying to recapture past glory. The transition and what results here feels like trying on an old jacket that still fits. Lyrically this is far more socially conscious than their past albums, which is the only significant difference but proves that death metal is still socially relevant. Be forewarned, this is no whitewashed view of society with professed hope for the future. Songs like Garden of Disdain, The Righteous Voice, Paradigms Warped, The Pillars Crumbling and The Fall Of Idols, besides retaining their Sumerian imagery and atmosphere, reflect a modern world in which, according to Tucker, “we’ve got all these miniature wars in neighborhoods, cities, countries, and we’ve got people with varying opinions causing chaos, yet everyone is doing what they feel is right.” It shows that in a manner of speaking, pessimistic lyrics in metal can be a good thing if it leads people to think. -Dave Wolff

Track list:
1. Piles Of Little Arms
2. D.E.A.D.
3. Garden of Disdain
4. The Righteous Voice
5. Architect And Iconoclast
6. Paradigms Warped
7. The Pillars Crumbling
8. For No Master
9. Declaring New Law
10. From The Hand Of Kings
11. The Fall Of Idols