Anthrax, Testament, Byzantine, DownSlave
The International, Knoxville, Tennessee. June 8, 2018
All photos by Deanna Revis
DownSlave is a southern thrash band from Knoxville. They didn't really get a good chance to play. They were sort of screwed by the venue. They sounded good. They just didn't have any room on stage and were kind of rushed to finish their set. 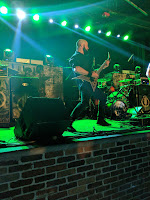 Byzantine is a thrash metal/heavy metal band from Charleston, West Virginia. They have shared the stage with the likes of Lamb of God, Anthrax, and Testament as well as others. They bring a mind blowing show. The stage presence of high octane. Chris Ojeda (vocals and rhythm guitar) will make you feel his intensity. Brian Henderson (lead guitar and vocals) is definitely a monster on the axe, and his vocals too. Sean Syndor (bass and backing vocals) is 200 proof no doubt! He is full of energy, intensity, and when he gets started this guy is unstoppable! Last but definitely not least Matt Bowles (drums) just WOW! When he gets in beast mode, Matt Bowles brings it! A real monster on the drums. All together Byzantine is a force to be reckoned with. They bring a live performance like no other. When the lights go back down, you are left wanting more. They should be on every metalhead's must see list. If you have never listened to them I would recommend the album's The Cicada Tree or The Fundamental Component. Byzantine is currently on Metal Blade Records. 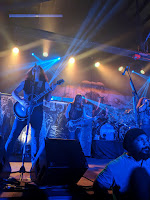 Testament. I grew up on bands like this. Even with the line-up changing over the past thirty-five years. I was blown away. Chuck Billy and his air guitar show how much fun he is having up there. Alex Skolnick and Eric Peterson definitely bring the pain, amazing axe work. Steve Did Giorgio on bass, makes you feel all of his blood, sweat, and tears. Gene Hoglan on drums, a heavy hitter. Testament does not leave you disappointed. 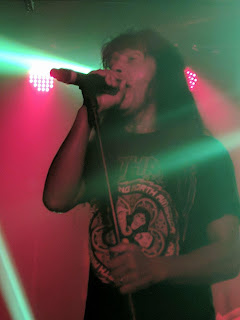 Anthrax!!! To have the opportunity to see one of the Big Four was an experience like no other. I have been listening to Anthrax since I was a kid. This was a bucket list show. And to be front row was even better. Joey Belladonna still sounds better than some of these guys half his age. Frank Bello on bass, all I can say is Wow! Charlie Benante on drums, hits heavy... hits hard... sounds like thunder. Jon Donais on guitar, has so much energy and pours his heart in it. And last but definitely not least...... Scott Ian! The axe man cometh!!! The only remaining founding member of Anthrax.... I have loved his playing for years. If Anthrax comes to your town, buy a ticket and go! You will not regret it! -Deanna Revis