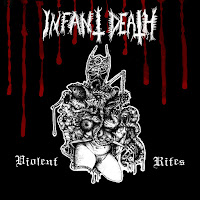 INFANT DEATH
Violent Rites
Apocalyptic Empire Records
Release Date: October 7, 2016
Infant Death are a band from Norway that plays a mixture of black, thrash and speed metal and this is a review of their 2016 album "Violent Rites" which was released by Apocalyptic Empire Records.
A very fast speed metal sound starts off the album along with some blast beats while the riffs also use a great amount of melody as well as the music being very heavily rooted in the 80's and all of the musical instruments have a very powerful sound to them and also mixes in elements of thrash.
Vocals are mostly black metal screams while the music also mixes in a great amount of influences of the first wave era of the genre and they also bring in a modern take on an old school genre and the song also bring in a mixture of slow, mid paced fast parts and the music always remains heavy.
Infant Death plays a musical style that takes the 80's genre of black, thrash and speed metal to create a sound of their own, the production sounds very old school while the lyrics cover violent and blasphemous themes.
In my opinion Infant Death are a very great sounding mixture of black, speed and thrash metal and if you are a fan of those musical genres, you should check out this band. RECOMMENDED TRACKS INCLUDE "Troops Of Dead" "Subhuman Elimination" "Blasphemy Prevails" and "False Prophecies". 8 out of 10. -Loki Astaroth

This review can also be read at Blackened Death Metal Zine -DW
Posted by Dave Wolff at 6:17 PM