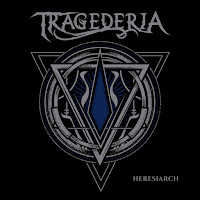 TRAGEDERIA
Heresiarch
Independent
Release Date: November 10, 2017
In November of 2017 I was sent ''Heresiarch,'' the newest release from TRAGEDERIA. I fully intended on doing a review for them, but due to the holidays I guess it slipped my mind. I threw this beast on today to check it out and I can honestly say I really enjoyed what I heard. Heavy guitars, drums, bass and gutturals paired with keys, choir vocals and female backups. Nice! I usually don't go too deep into detail with my reviews, but for this one I will try and do my best. Right from the get-go, the first song ''Negation Epitome'' reminds me of old ARCH ENEMY and ''Heartwork'' era CARCASS. This is just my opinion, but I do not believe that this is a bad thing. The main difference would be the melodic female vocalizations, but this pairs with the song well. The second song ''Total War'' is also good, the keys and the melodic yet heavy guitars being the first things I notice. Song number three, ''Devilborn (1694),'' is probably my favorite song on this release. It has an awesome vocal intro, the heaviness coming in quick with the occasional well placed guitar squeal. This one really struck me. The lead vocals are intense. This track also has a guitar buildup that ends at 2:51 into the song, quickly leading into an audio assault of super-metal proportions. The fourth track ''Bleak Future'' has a melodic yet ominous guitar intro, the keys and female vocals once again getting me. I could not entirely make out the vocals, but for some reason this track reminded me of going on epic adventures. I could picture myself on a Viking ship, sailing the seas to fight krakens with this song playing in the background. I'm odd I know, but leave me alone my medication is due soon. ''Rebirth,'' the fifth track, has a few cool bass rolls that I picked up at the beginning of the song. Once again, I could see this song being played in a battle scene for a modern NETFLIX fantasy special. This leaves only three tracks left. Track six, ''The Exiled King,'' had a bleak and depressing guitar intro that I really enjoyed. A very heavy song, the end depressing in a good way just like the beginning. The seventh track ''Into Oblivion'' was excellent, but the final track the release was named after is ever so slightly better. Violently heavy with pounding breakdowns, ''Heresiarch'' is great start to finish, a dramatic climax rushing forward as this release finally comes to a close. This release was excellent, and I will without doubt be looking for more from this band in the future. 10/10 would listen again. A great band, I really think that everyone should check these guys out. You will not regret it. -Devin Joseph Meaney

This review can also be read at The Dev Man Express. -DW
Posted by Dave Wolff at 11:17 PM