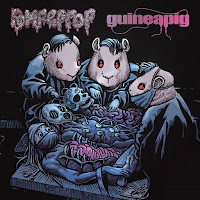 ROMPEPROP / GUINEAPIG
ROMPEPROP / GUINEAPIG split
Rotten Roll Rex
Release Date: April 20, 2017
It is early in the morning and I am just after finishing my first coffee. I was scrolling through Youtube and I came upon newer ROMPEPROP that I never heard of before. In 2017, apparently there was a split 12' released featuring both ROMPEPROP and GUINEAPIG. There are two tracks from each band and they all prove to be quite heavy and malicious. ROMPEPROP comes in first with their classic watery gurgly vocals, gore-grind never being the same since this band graced the underground. With an awesome ping snare with blasts and grooves, the drums are methodical and great. The guitars are down tuned and simplistic, making this what I would consider a perfect goregrind release. GUINEAPIG comes in second with vicious gutturals and watery gurgles of their own breed. Down-tuned guitars and bass chug along next to pounding drums, GUINEAPIG being just as impressive as ROMPEPROP! I will love gore-grind until the day that I die and I suggest anyone into the gurgles and the gore gets down with the tunes on this release. Monumental gore. 10/10 -Devin Joseph Meaney