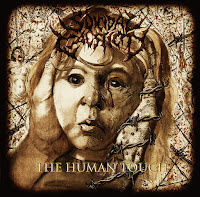 SUICIDAL CAUSTICITY
The Human Touch
Amputated Vein Records
Release Date: June 9, 2017
Suicidal Causticity are a band from Italy that plays a very brutal and guttural form of death metal and this is a review of their 2017 album "The Human Touch" which was released by Amputated Vein Records.
A very fast and brutal sound starts off the album along with a great amount of blast beats while the vocals are mostly death metal growls while the solos and leads also bring in more of a technical style when they are utilized along with the riffs also bringing in melodies at times.
Screams can also be heard in some parts of the songs along with all of the musical instruments having a very powerful sound to them while the songs also bring in a great mixture of slow, mid paced and fast parts as well as the vocals also getting very guttural at times, one track also brings in a brief use of spoken word parts, clean playing is also added onto the closing track which is also very long and epic in length.
Suicidal Causticity plays a style of death metal that is very brutal and guttural sounding, the production sounds very professional while the lyrics cover the encounter between the chaste lust for flesh and the vile edges of the mind.
In my opinion Suicidal Causticity are a very great sounding brutal and guttural death metal band and if you are a fan of this musical genre, you should check out this band. RECOMMENDED TRACKS INCLUDE "Diamond Grinder Spring,” "The Choral Brooke" and "Lynn". 8 out of 10. -Loki Astaroth

This review can also be read at Variety Of Death Zine. –DW