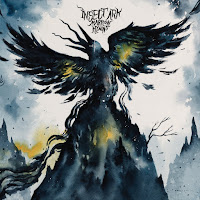 INSECT ARK
Marrow Hymns
Profound Lore Records
Country of origin: USA
Genre: Psychedelic doom metal
Release date: February 23, 2018
Founded as a solo project by Dana Schechter (bass, lap steel guitar, synthesizers) in 2011, Insect Ark took on Ashley Spungin (drums, synthesizers, hand built analog nose pedals) in 2015 for touring purposes in support of their Portal/Well release. The addition of a second member allowed for the band to grow in its potential, surpassing the vision Schechter had in mind when she founded it on her own. Being that the band come from NYC and Portland, Insect Ark is testimony that unconventional, productive music can emerge from the meeting and merging of two environments that can’t be placed into a category. Schechter and Spungin are reportedly excited about the impending release of Marrow Hymns in February, and eager for underground circles to hear what they have created. They are referred to as multi-instrumentalists, gear heads and visual artists, and all of this shows in their collaboration. Marrow Hymns’ nine recorded tracks, self-contained scenes from a surreal nightmare, are composed as a horror soundtrack and presented in layers as if they’re sonic representations of a painting. No vocals are to be found anywhere, as the band’s purpose with this album is to channel the unspoken, the unexpressed and the silenced through their music. Acquired taste or not, they succeed if your mind is open to what they bring to the table. To cite elements of doom, dark ambient and pre-alternative would just scratch the surface of what they achieve and grossly oversimplify their shared imagination. Any and all preconceptions of underground music thriving only on woe and wretchedness are cast aside once the undulating, constantly changing waves of dissonant, atmospheric sound wash over you. Before long you’ll realize it’s not just hopelessness you are caught up in. You experience catharsis as well as anguish, strength as well as fragility, rumination as well as turmoil, inner peace as well as internal strife, rebirth as well as death, hope as well as despair. This duality came from Schechter and Spungin going through what is described as a state of existential crises during the time this album was recorded. As a result they take to its farthest extremes the concept that one sensation cannot be experienced without its opposite. It should also be mentioned much of what they experienced they experienced as women, and women working in a field that was once male dominated but not as much anymore. Again their method is not for shallow, one-dimensional, depthless minds seeking an immediate fix; it rather makes for an engrossing, concentrated odyssey into the deepest recesses of awareness. You may have to listen to songs like Arp 9, In The Nest, Skin Walker, Tarnish, Windless and Daath multiple times for a greater understanding of their depth, but it you take time to accompany Schechter and Spungin on their journey you’ll get more than you expected out of it. -Dave Wolff