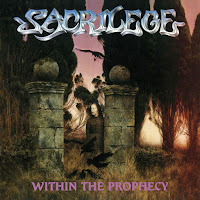 SACRILEGE
Within The Prophecy (Reissue)
Hammerheart Records
Release Date: February 2, 2018
Original Release Date: January 5, 1987 (Under One Flag)
The United Kingdom band Sacrilege were first active from 1984 to 1990 and officially reformed in 10`4 after a series of demo and lost tape re-releases. There is no word from Hammerheart Records if they’re recording new material but the label is reissuing two of their full length albums from the 1980s. 1987’s Within The Prophecy and 1989’s Turn Back Trilobite are considered unsung classics today, the former representing their transformation from crust punk to thrash metal, the latter being their first attempt at doom metal. I never got around to listening to Turn Back Trilobite when it first came out, but did come across Within The Prophecy late in 1988. The surreal cover art of Music For Nations’ original pressing made me interested in hearing what Sacrilege were offering inside. Before long I was absorbed and engrossed by what I heard; looking back and listening today I perceive the songs as one of the first expeditions into the epic domain bands explore on a continuous basis. Sight Of The Wise establishes what in those days was new territory for underground bands, with an ostentatious opening riff and lengthy buildup into the raw thrashing energy it eventually unleashes. Much of the rawness of the band’s roots in crust punk are present in the guitar progressions and frenetic percussion, and even the vocals to a lesser extent. These shades don’t get in the way of the musicianship too much, though the production tended to sound a little blurred for what thrash was evolving into at that time. But there is something about the all-encompassing wall of sound and siren-like vocals of Lynda "Tam" Simpson that draws you in. And at least the band wasn’t cloning Slayer or Metallica or trying to write more radio friendly music, which is most likely what gravitated me toward this recording. Besides this, the band had a female vocalist in a time when female vocalists were viewed as novelties at best and sex objects at worst. If Within The Prophecy was released a year or two earlier it just might have received more attention from underground press and lauded as more of a milestone. Hammerheart Records says Within The Prophecy is a milestone regardless; experiencing these songs again I can see their point without much effort. Like Znowhite, Sentinel Beast and Blessed Death, Sacrilege were both ahead of their time and in their own class. Without such bands taking chances, we likely wouldn’t have bands playing epic compositions as we know them. Listen to Winds Of Vengeance, The Fear Within and Search Eternal (the versions on the album and the demo versions) for a sense of their unspoken influence on the doom metal, power metal and symphonic metal of today. I may well want to listen to more classic material from them after listening to this album. -Dave Wolff