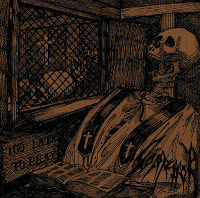 CONFESSOR AD
Too Late To Pray
Nihilistic Holocaust (France)
Place of origin: Strasbourg, France
Genre: Black/death metal
Release date: March 5, 2018
I’m definitely not hearing the most original death/black metal of the year here. However the French band Confessor AD composed an excellent EP with dark elements, thrash elements and roots in death and black metal from the 90s. They have many influences musically speaking, and I’m sure their melodic guitar riffs are not casual. I like Too Late To Pray because it sounds direct and crude; the real essence of underground metal. For a strange reason they have moments where the guitar riffs remind me of the old Spanish gods Canker: furious death metal with technical touches and extremely solid bass lines. This is another killer production from the French label Nihilistic Holocaust, which is well known for good young metal bands around the globe. This EP production has many good points for an extreme metal act. Just listen to the middle section of “Silent War”. But it also has many mistakes (some drum tempos and guitar harmonies are not well executed) here and there. It’s nothing that a few hours behind rehearsal room doors can’t fix. so no worries. Keep an eye out for this band and support the underground! -Victor Varas