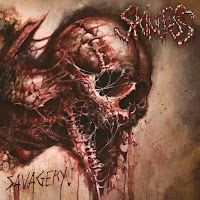 SKINLESS
Savagery
Relapse Records
Place of origin: Glens Falls, New York, USA
Genre: Brutal death metal
Recorded by Tom Case, Doomsday Bunker Studio, New York, USA and Dave Otero, Flatline Audio, Colorado, USA
Cover art by Jesse Levitt
Available on LP, CD and digital format
Release date: May 11, 2018
For a band that traveled a long journey from the first wave of New York death metal to worldwide renown, having started out by independently releasing demos and appearing on splits release by obscure indie labels, Skinless achieved it through a long line of demos, EPs, videos, splits and full lengths and live appearances with Morbid Angel, Mortician, Suffocation, Dying Fetus, Six Feet Under, Deicide, Immolation, Entombed, Vader, Cattle Decapitation and Grave not to mention the likes of Slayer, Pantera, Exodus and Overkill. Their last full length Only The Ruthless Remain garnered high praise from Terrorizer, Decibel and Metal Sucks who were already praising Savagery before it was even released. They write, “[Savagery] seems designed to cave the listener’s skull in with all the dignified grace of being beaten to death with a hammer.” To me it must be a sledgehammer or even a jackhammer since it feels so as I listen. Keeping at it since 1992 with backbreaking work, unceasing devotion to all things brutal and extensive performing, the band prove as many others have that death metal will always be strong while having something to offer you still can’t find anywhere aboveground. Some similarities to Carcass (Reek Of Putrefaction, Symphones Of Sickness) can be found here with some atmospheric guitars, shades of goregrind, menacing songwriting, precise musicianship and production that is dark, thick and sufficiently balanced to project the technical blast, crunch, bludgeoning drums and guttural vocals directly into your brain. The slam and groove Skinless bring to the table is written so well into the material it sounds natural with the time changes and melodies written in. Holding tight to their old school theme, Skinless are capable of holding their own alongside the newer DM bands of the 2010s by experience alone. From what I read of the lyrics I ascertain their message also reflects early death metal, pointing out how blind obedience leads to mass dumbing down, to premature expiration and ultimately everlasting condemnation of the soul. Relapse Records has been releasing albums by Skinless since 2001; Foreshadowing Our Demise, From Sacrifice To Survival and Trample The Weak, Hurdle The Dead; and I would advise you to check those out as well as Savagery. -Dave Wolff