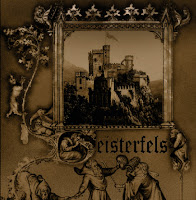 GEISTERFELS
La névrose de la pierre
Six Raw Records
Place of origin: France
Genre: Medieval Black metal
Available in CD, streaming and digital format
Release date: October 31, 2017
A concept about a French poet in the nineteenth century is always agreeable, especially in the field of black metal. It’s an imaginative idea to have this poet traveling the Rhine and Mosel valleys and encountering the ruins of castles in his journey. The comparisons the band draw between the scenery and the sorrows of modern times is just as conceptually inventive for a black metal act. This overview made me wish the lyrics were included on this album’s Bandcamp and Youtube links, the storyline sounded that prepossessing to me. It’s yet another concept the genre needs to expand on the power of one individual’s imagination. Geisterfels was founded in 2013 by a French composer and lyricist Céline Rosenheim aka Nebel; with the help of Aharon (Griffon) and Aldébaran (Darkenhöld) she spawns a celebration of ancient history you should hearken to. Besides validating black metal in general it helps establish French black metal as its own being, distinguishable from the scenes in Norway, England et cetera. It strives to stand out as much musically as lyrically. The guitars and lead vocals lend much to the band’s raw sound as it’s explored here, Aldébaran’s chord progressions construct pagan themes that work well with the rasping, alkaline vocal style of Aharon. Most striking is how the progressions transition unpredictably, giving the songs viridity and originality. This occurs during most of time changes and likewise within the blast sections. The band also has a heavu-duty rhythm section, with a prominent bass sound somewhat likened to Steve Harris and percussion providing many fills with the primal blast beats. The atmosphere plays a compelling role here, surfacing at inopportune moments as if presenting something rare and antiquated found by the nameless poet wayfaring through France. This especially keeps the listener in touch with the concept around which the lyrics are built. An essential release, particularly if you’re into extreme metal and poetry. -Dave Wolff