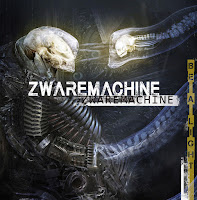 ZWAREMACHINE
Be A Light
Phage Tapes
Place of origin: Minneapolis, Minnesota, USA
Genre: Industrial, cyber, darkwave
Format: CD/Cassette/Digital
Release date: April 11, 2018
The three musicians comprising Zwaremachine (Mach FoX, Adam01, Ryan Ruckus) have been composing since the early 2010s. I’ve heard different descriptions of them from various sources, including industrial, cyber, ebm, darkwave, dark experimental, dark and futuristic and Minimal Hypnotic Industrial Body Music (this last has to be the most convincing when it comes to outlining their music). Even stranger is their bio statement: “dark and dangerous individuals known for various stunts including walking through walls, time-shifting, and designing futuristic sonic weaponry.” The band write and compose almost exclusively with keyboards and electronic instruments, with minimal use of string instruments, and some of the things they do as a three man band might even make Rush back up a step and go “holy shit...” I get the feeling from my research that their mystique relies heavily on their live performances, and you have to see them to fully appreciate their concept. Be A Light is a lengthy release from this project, with seven original tracks and twice as many remixes. If you’re enthusiastic in a grand manner about darkwave and industrial, there are different interpretations of the original songs drawing from seemingly inexhaustible sources. As you listen you begin to consider how many sections in each track would be more compelling accompanied by visuals presented in their shows. I visited their official website to look for promotional videos, and found four. Watching the videos; DRKNRG, Person To Person, Person To Person (Paul Birken Remix), Be A Light (ENDIF Remix); I see how the cyber-psychedelic visuals reinforce the songs. Each promotional video has different effects, which would all be engaging if displayed on TV monitors or a screen positioned behind the band. The video for Person To Person (Paul Birken Remix) is a futuristic simulation or an exercise in virtual reality I found to be comparable to the sci fi noir of The Terminator, Aliens and Blade Runner. As a science fiction fan this video most deeply resonated with me. The remix adds dimensions I wouldn’t have expected to find. Be A Light (ENDIF Remix) is simultaneously cyber, bleak and trippy, offering the listener a natural high without the chemicals. Those two remixes made me want to listen to the others, and I generally like the remixes of the songs more than the inceptive versions. While I have delved into techno and industrial on and off for many years, this album may well inspire me to seek out more albums of those genres. -Dave Wolff