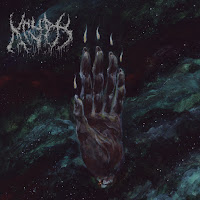 KRYPTS
Remnants of Expansion
Dark Descent Records (Colorado, USA)
Place of origin: Finland
Genre: Doom/death metal
Release date: October 28, 2016
This is a gem from 2016. If you are old school you should know today’s classic death metal scene in north Europe is as healthy as it was 25 years ago. Coming from Finland, the filthy entity Krypts has been active since 2008 and was formed with people from bands like The Beheading, Gorephilia, and Hooded Menace. Jesus, what a mix of putrid brains! This is nothing but a dark piece of doomed death metal, highly rooted in horrid atmosphere, abyssal gutturals and dense guitar riffs. All the tracks are seriously dark and morbid, with slow tempo sections and oppressive lines. For some moments, simplicity plays into this album musically. But this band knows the meaning of sinister sounds, and compose gloomy tracks. You will find significant compositions forged in tight guitars, much of these are refinement of doom/death metal, with real knowledge of both genres. Krypts has given the world their own style since their 2009 debut demo. It’s the purest essence of doom/death metal that will drive you to the limits of sanity, and blast your speakers at the same time. -Victor Varas