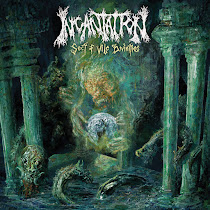 Band: Incantation
Location: Johnstown, Pennsylvania
Country: USA
Genre: Death metal
Full Length: Sect of Vile Divinities
Format: Vinyl, CD, digital album, vinyl/digital
Label: Relapse Records (USA)
Release date: August 21, 2020
Thirty one years and fifteen full lengths (including three live albums) hasn’t slowed Incantation down. One of the east coast’s premier extreme bands with Mortician, Immolation, Rottrevore, Pyrexia and Profanatica, they made contributions to the death metal genre that fans everywhere will attest to. Founding member John McEntee has always had a committed sense of what he likes to write and what Incantation’s supporters want to hear, and has always retained the draconian essence of death metal, without censure or concession. This is why Incantation is instantly recognizable and “Sect of Vile Divinities” was eagerly anticipated since the band re-established Relapse Records as home with 2017’s “Profane Nexus.” Their advance video “Entrails of the Hag Queen” (released after the video for “Fury’s Manifesto”) is a surrealist horror movie in the vein of Fulci, Argento and D’Amato with imagery as dreadful and disturbing as the climate of the song itself. This promotional video likely won’t get past the censors but it’s a clever, resourceful foretaste of what was to come that needed to be made. You should listen to the entire album to grasp the idea that Incantation is no shiny, happy band, nor do they bother to wax or buff their sound. On “Sect of Vile Divinities” they completely reverse that direction, manifest everything that makes death metal shadowy, gloomy, cheerless and repugnant and make it painlessly straightforward and easy to take in. The surreal parameters of “Entrails of the Hag Queen” make their presence known full scale here; the sound is clean and well produced but this serves to heighten the lurid shadiness of the album as well as the dissonant chords, chaotic riffs, intermittent doomy themes and literary lyrical themes. In some ways this feels like a dark ambient or noise album by Aghast (Norway), Abruptum (Sweden), Darkness Enshroud (USA) or Vond (Norway). At the same time Incantation take early death metal as something more aggressive, murky and calamitous than thrash metal, tighten it up, make it more pummeling and relentless and add touches of funeral doom, creating an album that’s purely death metal and purely Incantation. This is an album that newer death metal bands should look to as an example of the genre done properly. –Dave Wolff
Lineup:
John McEntee: Guitar, vocals
Sonny Lombardozzi: Lead guitars
Chuck Sherwood: Bass
Kyle Severn: Drums
Track list:
1. Ritual Impurity (Seven of the Sky is One)
2. Propitiation
3. Entrails of the Hag Queen
4. Guardians from the Primeval
5. Black Fathom’s Fire
6. Ignis Fatuus
7. Chant of Formless Dread
8. Shadow-Blade Masters of Tempest and Maelstrom
9. Scribes of the Stygian
10. Unborn Ambrosia
11. Fury’s Manifesto
12. Siege Hive
Posted by Dave Wolff at 11:52 PM