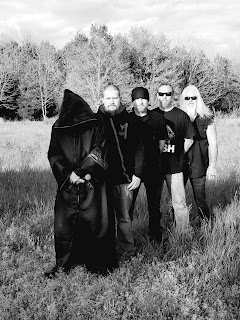 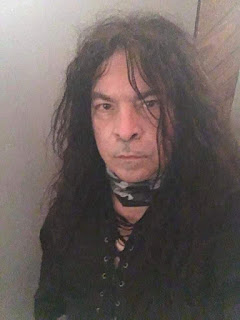 Damien Lee Thorr is the composer and lead guitarist for the popular, classically influenced and openly atheist/political activist metal band Predator, has authored many essays and editorials for Asphyxium Zine and written he horror-erotica novel “The Vampire Journals”. Check out Predator’s 2011 full length "Born in Blood" at Youtube and visit their official site at http://www.predatortheband.com/.
Posted by Dave Wolff at 7:09 PM No comments: 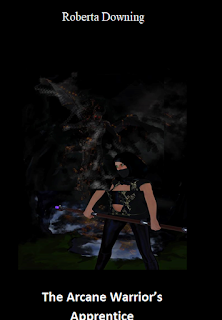 Chapter Two
Bell was making her way over the bridge that would take her out of the forest and back home when she noticed a man on horseback riding into Singerville. As a half elf she had exceptional vision and could see that he was dressed in black with black cloth that covered all but his eyes, nose and mouth. She had never seen anyone dressed in such a fashion and this made her curious so she ran the rest of the way home.
She wiped her feet on the welcome mat outside of the brick house then went in.
“Ah Bell! Come in the kitchen!” her mother said.
The house smelled amazing! She knew her mom had baked a peach cobbler. As she entered the kitchen, her mother was pulling a pie and pan of biscuits out of the oven.
“Momma, there was a strange man coming into town a few minutes ago. I don’t know where he’s gone or who he’s here to see”
“Your father has a visitor Bell. He’s not to be disturbed” Lily said as she hurried to cover the biscuits with a towel before her daughter could see them. “I think it time you go get cleaned up and dressed for the party. You best hurry” and with that Lily gave her daughter a gentle push out of the kitchen.
The nasty smell from her nightmare seemed to linger in her mind and in her nose. As she bathed she thought about the nightmare, the bardic academy and what Grammu had told her about decisions, choices, and fate and then she thought of her family. Tears streamed down her face as that booming voice she heard threatening to take everything she loved away. She submerged her head under the bath water to rinse her hair and she let out a muffled scream of despair.
She finished her bath and got dressed. She went into her room which was next to her father’s office. Bell could hear the two men speaking but she could not identify the language. It was one she had not heard before. Growing up in a family as diverse as the Singer Clan she was almost certain she had heard about every language except that of dragons. Not only was the young lady intrigued at hearing a new language, it tickled her ears in an old familiar way.
Bell finished dressing and sat down at the mirror to brush her hair. Once again Grammu’s words of her having a decision to make crossed her mind. She thought about her dream of going to the bardic academy and becoming even greater than the clan’s patriarch Cwell Singer, who also just happened to be the deity of bards. As she saw that dream in her mind the nightmare came flooding back and in a split second’s time she knew that path was not for her.
Filled with relief that she made one decision she knew she must find another. Then the anxiety over powered her knowing that she was going to have to tell her parents she was not going to go to the academy and she knew that was going to break her mother’s heart. In the same moment she thought her grandfather would be upset as well and then in that thought somehow she lost her faith in the bardic god. She glanced down at his holy symbol of the golden mandolin and it no longer held any consolation for her so she removed it.
She looked at herself in the mirror and she thought that for now she just couldn’t tell anyone so she would give her last performance of her life and pretend that she was excited about her birthday and about going to the academy and then she would drop the bomb later. With that she immolated the excitement she had the day before and left the room.
Posted by Dave Wolff at 6:00 AM No comments: