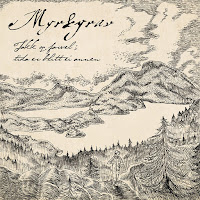 MYRKGRAV
Takk Og Farvel; Tida Er Blitt Ei Annen
Independent
http://www.facebook.com/Myrkgrav
Myrkgrav is a one-man folk/black metal band founded in 2003 by the Norwegian musician Lars Jensen. Takk Og Farvel; Tida Er Blitt Ei Annen is the project’s second full length, following Trollskau, Skrømt Og Kølabrenning which was released in 2006 among a series of full length demos, EPs and split releases. Both full lengths can be streamed at Youtube (this one at Jensen’s Youtube profile, the other at Black Metal Promotion) there though Jensen’s work is more than worth shelling out your funds to acquire. You receive over an hour of top notch musicianship: professional, sophisticated, grandiose and hypnotic… but I’m starting to get ahead of myself here. In the 90s and 2000s there were many solo projects in which the founding member handled all the instruments independently without the benefit of session musicians, thus taking complete creative control of their work. Some may think it’s preferable to have a full band contributing ideas to an album, and I’m not denying it’s valuable if those ideas work well together. But many solo projects (Charmand Grimloch’s Tartaros almost always comes to mind) spawned releases that held their own as viable musical statements as if more than one artist collaborated on them. Myrgrav’s current outing falls within that category and Jensen displays a perfect grasp of what he was doing and sought to achieve. By handling all lead and backing vocals, guitar, bass, keyboards, strings, flute and drums, choosing all arrangements and taking them as far as his imagination allowed he created a monumental effort that was released just in time to enter the hall of 2016’s finest moments in extreme music. One you could swear was recorded by several musicians working together. This release also demonstrates the integrity of a musician pursuing his own vision to the fullest, and show metal fans how far one person’s imagination and self-awareness can travel. That Jensen takes on so many different instruments allows for a diversity in his songs that is not too overdone or overindulged to the point of pretentiousness. He could as easily have recorded an album with long guitar solos that force down your throat how virtuoso-like his playing is. Rather he composes according to what works best for each song. Granted there are a good number of guitar solos and pagan/Celtic themes here, but they are more or less evenly balanced and there is minimal effort to overstay their welcome. The same can be said about the balance between songs featuring vocals and songs that are strictly instrumentals, and the balance between melodic vocals and black metal vocals. There is as much diversity as on rock/fusion albums with varying influences, just channeled in another direction. Did I mention the material here takes you back to an ancient past in which paganism ruled and the winds were alive with the spirits of yore, and does so effortlessly? This is important, too. -Dave Wolff
Track list:
1. Skjøn jomfru (Norwegian version)
2. Vonde auer
3. Bakom gyrihaugen 05:21 instrumental
4. Soterudsvarten
5. Om å danse bekhette (10th anniversary edition)
6. Spålsnatt instrumental
7. Tørrhard
8. Finnkjerringa (10th anniversary edition)
9. Østa glette instrumental
10. Sjuguttmyra
11. Uttjent
12. Tviom! instrumental
13. Skjøn jomfru (English version)
14. Takk og farvel
Posted by Dave Wolff at 7:09 PM No comments: 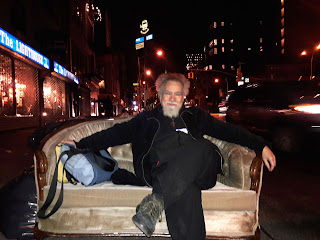 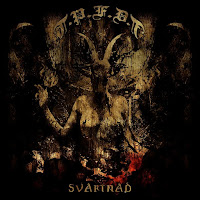 THE PETE FLESH DEATH TRIP
Svartnad
Critical Mass Recordings
Released May 16, 2016
http://www.facebook.com/peteflesh
http://www.thepetefleshdeathtrip.com/sv-SE
Don't let the name fool you. Obvious and unintended or intentional puns aside, if you disregard this one on name alone, you're missing out on a great release from start to finish. I wasn't sure what to expect going into giving this one a spin, but if there's any doubt these guys are not serious, it quickly becomes evident when you hear the material that they should be taken seriously. With a brooding and menacing atmosphere, and a varied approach in their attack, The Pete Flesh Death Trip's, Svartnad, is a ferocious display of blended elements that conjure up a uniquely visceral output of no nonsense Death Metal. The songs are crafted with a keen sense of achieving a certain imposing and foreboding mood, and yet these guys are no one trick pony. Riffs that trudge along in a dark and doom-laden aesthetic evolve into all out Death Metal passages, and vice versa. This keeps the atmosphere prevalent and predominant throughout the album, but also offers the listener plenty of variety to keep things interesting. The band manages to walk a fine line between styles here much in the same way Celtic Frost had done so throughout its existence, but they've managed to accomplish this while also acquiring a sound all their own which prevents them from being a recycled or rehashed version of a ghost from the past. There are qualities that bring forth certain aspects of bands like Ulcerate, Celtic Frost, Dissection, Dismember, and even early At The Gates (as far as some of the guitar work goes). That is to say, that the guitars have that Swedish buzzsaw sort of tone to them, but to simply draw these comparisons for the sake of explaining the sound, really doesn't quite do this release justice. I hear bits and pieces of some of these examples strewn throughout this album, but it is far from a regurgitation of the familiar. What it is, is a different monster that has been beckoned from the depths, that has shades of the familiar to it, but undoubtedly stands on its own and pushes things forward rather than attempting to relive or recapture the past. It turns out, this is the solo project of one, Pete Flesh, who you may known from such acts as Flesh, Deceiver, Thrown, and Maze Of Torment. What it is, is a beast forged by the hands and mind of someone who has been around this style of music and is comfortable with utilizing that experience to create something new and interesting. The songwriting is strong, the musicianship is admirable, and the end result is absolutely worth your time as something you should subject your ears to. There is not a bad track on the album, but so far I'm partial to "Burial Shore", "The Sun Will Fail", "Melting The Frost From Your Eyes", and the closer, "Svartnad". I will be listening again. Sometimes the unexpected is exactly what you need to break the monotony. If you've ever been in a record store and taken a chance on an unknown band because maybe their artwork jumps off the shelf at you, brought the album home, and proceeded to have your mind blown-then, you'll understand why I prefer to go in blind when reviewing bands I'm not previously familiar with. I prefer to let the music do the talking first. The fact that this is a solo effort makes it all the more impressive in my mind. There are no puns to be found here. The only joke is on you if you skip over this one. -Alan Lisanti
Track list:
1. In Ruinam Iniquitas
2. Burial Shore
3. All The Serpents
4. The Sun Will Fail
5. Melting The Frost From Your Eyes
6. The Winter Of The Wolves
7. She Dwells In The Dark
8. Svartnad
Posted by Dave Wolff at 3:31 AM No comments: 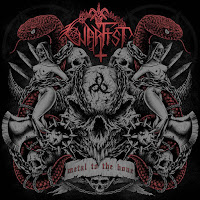 WARFIST
Metal to the Bone
Godz ov War Productions
http://warfist.bandcamp.com
This is forged in a very peculiar mix of explosive thrash metal and alcoholic black metal, with thick roots in punk, and rabid hardcore music. Of course, we are talking about a Polish band with a lot of experience in fast metal music and extremely raw attitude. Is there any doubt? Well, just listen to the excellent piece fury called “Written with blood”, which should have been the opener track of the album, btw. Coming from Zielona Góra, these guys have cleared that extreme metal music comes from rock n’ roll, so everything here has the essence of the genre too. It’s like if you are listening to early German thrash metal bands like Destruction, Tank, Sodom, etc. This is an entity with tons of musical skills, crushing guitar riffs and well-conceived arrangements in all instruments. Also, I must say that everything here is composed for playing in live shows, so you can imagine truly apocalyptic mosh pits with the band. As aforementioned, this is a great album of thrash metal with superlative musical arrangements and metallic spirit on every single note. No weak ears here please. -Victor Varas
Track list:
1. Pestilent Plague
2. Written with Blood
3. Convent of Sin
4. Tribe of Lebus
5. Breed of War
6. Metal to the Bone
7. NecroVenom
8. Playing God
9. Reclaim the Crown
Posted by Dave Wolff at 8:06 PM No comments: 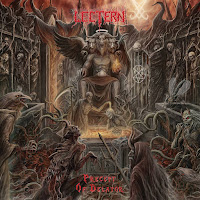 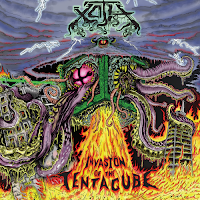 XOTH
Invasion of the Tentacube
Independent
http://xoth.bandcamp.com
When extreme metal bands create melodic stuff with “guttural” vocals, or “black metal” vocals, there are many risks to take care, as it doesn’t always give good results. Sometimes, vocalists follow the same line of all instruments, and it can sound a bit cheesy, predictable and tired. This band has some of these mistakes, although I admit music impressed me a lot in certain parts. Coming from Seattle, Washington, these guys created a very distinctive debut album, with tons of progressive elements, complex guitar riffs, and melodic stuff. Actually, everything seems to be tied in modern structures with high doses of progressive metal, heavy metal spirit, and (thanx Satan!) an excellent-incisive bass guitar performance. I liked the music because of twin guitars lines, melodic phrases, and good performance of all instruments, that denotes people with extensive experience in progressive music. It seems like they don’t fear to include complex sections, united by great arrangements, and I admire the 100% effective result. My favorite one is “Transcending the Energy Harvest” which sounds really apocalyptic and chaotic, surrounded by tons of black metal elements and good taste in crushing lines. My only complaint is the vocalist. Sorry, but I hate it. Hopefully next time he will create better stuff. Peace. -Victor Varas
Track list:
1. Tentacles of Terror
2. Antediluvian Annihilation
3. Terramorphosis
4. Transcending the Energy Harvest
5. Invasion of the Tentacube
6. Digital Mausoleum
7. Ancient Sentient Ooze
8. Universal Death
9. Consciousness Void
Posted by Dave Wolff at 8:02 PM No comments: