Interview with Tibbie X-Kamikaze of GASH by Dave Wolff 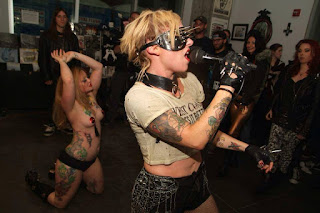 Interview with Tibbie X-Kamikaze of GASH
From where is GASH based and how long have you been part of the punk scene there? What made you decide to become a punk in the first place?
GASH is an interactive S&M punk band from South Philadelphia. I moved here from NYC three years ago now. I've been involved in underground music art and performance since the 90's. Punk spoke to me as a child, the scene worldwide I consider family. I noticed a shift at shows as the audience had become more disconnected from the performance - viewing the "show" through cell phone screens. Focusing on capturing a moment for later instead of being present and experiencing the shared "NOW". What I love about punk is the physical bonding, heightened emotional resonance from the shared energy between audience and band. At live GASH shows I surrender myself to the music and people that have inspired me and shaped my reality as I hope to manifest inspiration in return.

Has releasing Subspace free through your website helped the band reach more listeners and fans?
I've toured all over with Reagan Youth and I meet people in faraway places that have listened to Subspace and it blows me away. My purpose is to create a wave of Liberation with GASH and to ride that towards an enlightened future together with our listeners so the more distribution of our message the better.

On Youtube I noticed live clips of the band and an interview conducted by Jo Pincushion. Explain how this interview was arranged. How much did you get to discuss the band with Pincushion in the clip?
Nikki! Nikki is our brain and arranges our tours and interviews, and helps me function and stay alive which is not an easy task. I was very nervous during that Jo Pincushion interview. It was one of the first live singular interviews; I'm more comfortable with the full band. I haven't watched it so I hope it makes sense. I don't watch interviews I do; it gives me a lot of anxiety. I only watched one I did in California for Reagan Youth because it was really intense. Like the first time I opened up about my personal life and I was incredibly stoned on hash. The camera filmed me all warped until I calmed down and I'm sure my energy had something to do with that. I mean it’s totally real and I think I was speaking directly to someone I didn't even know yet who came to me through that interview.

Are there any professionally made promotional videos released by GASH since you’ve been active?
Kevin Vonesper made the video for Ritual, and it’s great. BUT, it was filmed from our first performance with Domme Stephxecutioner and we have progressed so much since then. When our albums done I want to make a lot of videos. I have tons of visual ideas; I just need to find people to film and edit.
What are some of the ideas you have for future promotional videos? How about the rest of the band?
I want our videos to be visual audio resonance, vibrationally in sync with the collective subconscious to restore Truth and Love in world gone commercially blank. I say we are the Sexual Instigators of the Rock-n-Roll Freedom Revolution movement because in song, stage or film we are not "performing", we are real. I am revealing stuff that's even hard for me to be public with. My point is to eradicate oppression, self-shame and lying to seek a higher place of enlightenment for all, through personal truth exposed without judgement.
How long have you been a member of Reagan Youth? Describe some of the performances you have done with them?
I’ve been in Reagan Youth since 2012 and Paul Cripple, original guitarist is family to me. I mean he really got me back into music and I am eternally thankful to him for being a good friend and letting me be in his band. I've gotten to travel all over in Reagan Youth, playing these songs that I listened to for so many years before meeting Paul, ya know it’s like perfect. We play house parties and huge festivals and dive bars and fancy pants venues. I prefer anywhere where we can meet people and see other bands. The festivals are stressful because everyone's freaking out about time slots and it’s huge, impersonal and confusing with so many bands. Shows that stick out for me are, a basement house party we played in Detroit that was packed, an abandoned funeral home we played in Buffalo NY, TLA in Philly with Dead Kennedys, oh and The Boneyard, DIY punk house in Ohio there’s so many. The people I’ve met on the road, I get so attached. I mean we always stay with people almost never motels so we get close. It bothers me how far away everyone is sometimes.
You recently traveled with Reagan Youth and played some shows with them earlier this month. Describe how those went?
Anytime I'm with Paul, it is a good time. I used to get scared like, ah it’s gonna be so crazy. Paul’s super intense and I was absorbed in paranoia about him not liking me, but thankfully I've managed to drop all that crap especially on this last tour. We had a blast together. We mostly traveled with the band Sober Daze all around Texas. If I could clone myself and live like Cylons with shared thoughts so I could still be there and here, I would still be there. In a heartbeat.
Are you planning future tours in the U.S. with Reagan Youth, or recording material with them?
Reagan Youth will always tour. As long as Paul has me on as his bassist I’m down to go anywhere (instead of going fuckin-nowhere). Paul has another band called Dust Angel and a buncha songs for his other band with Dave Insurgent called House Of God. Those songs people don’t know so I hope we get in the studio someday to get them out. I know he has a concept album in mind for the last Reagan Youth album but we don’t have dates or anything set up as of now recording wise.

What does GASH have in mind for their next release? Will it also be made available for free? How about more live appearances and internet interviews?
Our newest album "Astral Liberation" will be our first call to action, to gather up as many into GASH as possible. We paid out of pocket to record over the past year and a half so we can’t give the entire album away. But I hope the people who do buy it can burn copies or whatever, I’m out of touch with file sharing these days. I want people to spread it around any way they can and as much as they can. GASH are touring everywhere, we have an upcoming Midwest tour early November and then Texas, Portland, Seattle, California and Europe. I thought about where I would like to be in ten years a lot and I think I have an answer for now. With my family, GASH, everywhere. Pain Pleasure, Liberation.
GASH official Youtube
Tibbie X on Youtube