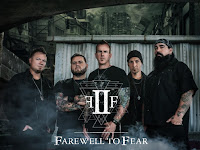 Band: FAREWELL TO FEAR
Place of origin: USA
Genre: Modern rock
Promotional video: Your Cure
Label: Pavement Music
Release date: December 8, 2018
Farewell To Fear has existed since 2012 or 2013, and in preparation for the May release of their next album and a tour starting three months earlier they’re being pushed as the next big thing in what’s called rock today. Instead of alternative, grunge, emo, screamo, pop-punk or nu-metal, they’re referred to as “modern rock.” This title is interesting because some might consider them too lightweight for their tastes, and some might consider them too cheerless. Since the 2000s alternative have been entrenched between those two extreme viewpoints, and oversaturated with bands whose styles are too identical. Are we getting anything here that’s atypical enough to attract attention? Alternative is also long associated with mental stagnation and unwillingness to escape the “life sucks” mentality. The preparation of this band’s official biography suggests conscious opposition to that notion. The name Farewell To Fear was chosen with facing what holds you back, internally or externally, in mind. For a band that (according to their bio) emerged from the abyss left when grunge became a trend, to declare their intention of becoming stars makes room for debate. Are they going to break trite clichés, or are they preaching? How much do they really have to offer? Stardom is no longer measured by major labels or wealthy PR agents; and apparently the band is striking a chord out there since they’re building a following via net streaming and satellite radio. They even got props from Howard Stern on his show. Their song “Your Cure” starts with enough familiarity, with quiet, somber introspection and vocals heavy with regret for a broken relationship, but as it progresses there are differences. Most songs with similar themes either long for a return to happier times, or promise reprisal. This song realizes, while the regret is there, perhaps this loss is for the better. The empty house in the promotional video, haunted by memories to be purged, is another indication of this idea. The lead vocals and melodies are pushing toward breaking out of the formulaic aspects of the genre they’re working in. This is not a typical lost love song. It offers a third path that many others can’t offer. One might argue that such songs don’t sell. This may have been true twenty years ago, but times change and attitudes change and fewer people in the mainstream are willing to play it safe. Whether or not Farewell To Fear will succeed and be remembered, at least they’re making an effort to approach things differently. -Dave Wolff