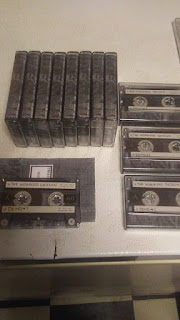 Posted by Dave Wolff at 3:11 PM No comments:

VANHELGD
A Plea For Divine Necromancy
Single taken from their upcoming full length Deimos Sanktuarium, to be released October 12, 2018 on Dark Descent Records
Place of origin: Sweden
Genre: Death/doom metal
Recorded at Studio Underjord with Joona Hassinen
Mixing and mastering by Tore Stjerna at Necromorbus Studio
Release date: September 3, 2018
The Swedish band Vanhelgd have announced their latest full-length Deimos Sanktuarium, due out October 12, 2018 (CD, vinyl & digital), in conjunction with Dark Descent Records. With their unwavering style of obscurum death/doom metal, heavily drenched in riffs of dejection and aggression, Vanhelgd is determined to clobber out some of the heaviest yet most forlorn extreme music from recent years. Deimos Sanktuarium is a vibrant work of contempt and apathy, molded in an enraptured state of beautiful grief. The single A Plea For Divine Necromancy shows just how raw and ugly things can get while still being thoroughly enjoyable, though this will be too much for many to digest. Rich in murk and dire atmosphere, it’s canonic with the creepy factor set to maximum. It’s loaded with nasty and jagged riffing and the ridiculously low-register, vile retching pushes it into insanity. The song sports a maggot infested sound and riffs both menacing and memorable with some inspired doom. A Plea For Divine Necromancy has everything a fan of death metal could want except non-stop speed, but there’s enough of that to keep most happy. I love this much and recommend it for all fans of extremely rotten, fetid death metal. -Serafima Okuneva

Posted by Dave Wolff at 4:31 PM No comments: 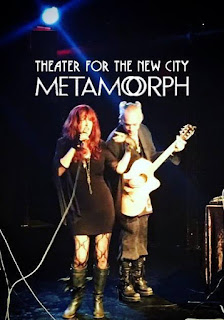 Posted by Dave Wolff at 5:02 PM No comments: 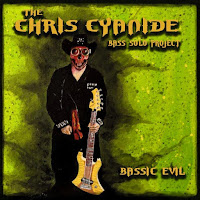 I last interviewed you for Autoeroticasphyxium zine in August of 2016. What has been going on with you since then?
Since last being interviewed I decided to do my own thing and go solo. I hit a rough patch where doing a band was not going to work out financially and time wise. After taking a step back, I just sat at home with my digital recorder and jammed out on some ideas. I started doing a bass only/industrial thing. These were very rough recordings of course but I put them out there and got some nice responses back for the most part. Also worked on some side projects with Rafael Brimstone singer of Legion on some dark symphonic/orchestral songs. As some time went by, things started looking better as far as some personal things going on and I was getting an itch to play out again. I asked myself "Could I actually do this bass solo thing live, and would people be into it?" I figured what could it hurt if I keep it simple and book a couple of local shows? I booked two shows. One at Gussy's Bar in Astoria, Queens, another at The Blue Room in Secaucus. New Jersey. I did a radio interview with The Graveyard Shift to promote it. Dan Montgomery who runs the station told me I'd always be part of The Graveyard family. His listeners were already familiar with me so it was a great platform to get the word out. So now it was time to really get social media stuff out there. New Facebook, Soundcloud and Reverbnation pages were made for The Chris Cyanide Bass Solo Project and I got to promoting all the stuff online while I recorded more songs. Finally it was time to play my first show at Gussy’s Bar. My friend Alicia, Amaris The Fire Vixen, joined me onstage to do some dancing. It worked really well with the industrial music. I was really happy she came because I'm not gonna lie. I was really nervous about this show. I wasn't sure how people would react. It was a good turnout. A lot a family and friends came out to support and I was pleasantly surprised. I knew my second show at the Blue Room would be a different story. I was on my own for that one. Just me, my basses, an industrial backing track and an audience that didn't know who I was. It turned out to be an important night for me. I met the guys in Agents Of Aggression who put on a killer performance and during their set, they mentioned that they would be signing with Cataclysm Records. This really got me thinking. I felt I was in a place with my music where signing with a label was possible. I was already comfortable talking with Tim McMurtrie who helped me in booking that particular show among others for a few different bands I had been in. Also, Tim is a veteran to the music scene and his opinions and knowledge are invaluable! We talked and got the whole process going but there was still an issue (in my opinion) with the quality of the recording of my songs. They were just home recorded demos and not what I wanted to release on an album. I have seen and have been in bands that made that mistake. I tried having the songs remixed but was having a hard time getting what I wanted. That's when Johnny Patterson stepped in. He saw how I was struggling and offered to help with his home recording studio. For those that don't know him, Johnny Patterson is also a veteran in the music scene having been Billy Idol's touring bass player and also with Niki Buzz just to name a couple. We re-recorded all eight of my songs from scratch. Johnny mixed and mastered them and I'm much happier with everything. He even mixed my new backing tracks for live shows. As all this was happening, I was booking more and more shows. From clubs like Blackthorn 51 and Otto's Shrunken Head to private events where I got to do shows with my friends Matt and Alicia helping me out onstage again. I'd been playing shows and preparing my debut album. I decided to call it "Bassic Evil" by The Chris Cyanide Bass Solo Project and had the cover artwork done by Bobby Leatherlungs Lucas. It will be released worldwide October 5 by Cataclysm Records. You can download it on all digital platforms, or get a physical CD from me or my official website.

MASTIC SCUM
Dyers Eve [Metallica Cover] 2018
Tribute to Metallica`s 30th anniversary of “…And Justice for All"
Place of origin: Salzburg, Austria
Genre: Death metal/Grindcore
Produced by Harry Gandler, Mike Kronstorfer, Gösser Bier
Mixed at Grindlab Studio
Mastered at Metalforge Studio
Release date: August 25, 2018
The Austrian death metallers Mastic Scum released their cover of Dyers Eve August 25, thirty years to the day since Metallica released …And Justice For All and made impressions on popular music that still resonate in the present. I could rave about what an awesome gesture it was and how …And Justice For All impacted the band. Instead I’ll dive beneath the surface and hopefully encourage some thought about whether the song is still relevant and the reasons another Metallica cover would be received well in today’s underground. Bear in mind that Metallica is one of the most covered bands in metal’s history. Personally I always liked Metallica and respect them for their long struggle to be recognized on their own terms, in the midst of controversy that surrounded them more than once. The most recent controversy came from their 2017 Grammy performance with Lady Gaga. Uproar ensued as to whether the band needed Gaga to validate them (Eddie Trunk was particularly and understandably vocal about this). Is it selling out to appeal to a wider pop audience? Or is it a logical progression of a band who always did what they wanted. How would a wider pop audience relate to older songs like No Remorse, Escape, Welcome Home (Sanitarium) and Dyers Eve? Also, how would fans of extreme metal relate to the song three decades after it was released? The song itself is a rant from a former teenager entering his 20s directed at his parents for creating a suppressive, overprotective environment around him. It’s not as much disrespect as it is a statement of confusion and anguish from someone sent on his own after living in said environment. Death metal and extreme metal are coming closer to being respected on their own merit, so there is a question of whether fans in the late 10s will be able to relate to the lyrics as much as fans from when …And Justice For All first came out. Fans today will likely understand Mastic Scum’s desire to honor a band whose influence has been so far reaching for so long. But would they understand the isolation and disillusionment of a kid who grew up in a time when metal was not as respected as it is today? The answer will probably depend on each person and his own experiences. All this being said, Mastic Scum do a fine job commemorating …And Justice For All and placing their stamp on Dyers Eve. They manage to give the track a modern DM flavor while keeping its original thrash metal fire. The lyrics are easily discernible for long time Metallica fans, without a need for a lyric sheet, This cover is worth checking out while you’re waiting for new material from them. -Dave Wolff

Posted by Dave Wolff at 1:50 PM No comments: