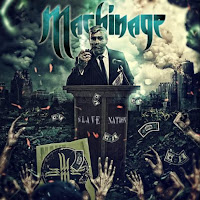 MACHINAGE
Slave Nation
Independent
http://www.facebook.com/machinage.Official
The last full length released by Machinage was It Makes Us Hate in 2011. It proved without additional effort that Brazilian thrash metal still lives, breathes and attracts audiences. This year they enter the digital age with Slave Nation, exclusively available on most internet outlets including Itunes. A preview is available on Youtube along with It Makes Us Hate in its entirety for those of you who are interested in checking their debut out first. Slave Nation was produced by the infamous Max Norman who you may remember worked with Ozzy, Grim Reaper, Armored Saint, Megadeth, Death Angel, Fates Warning and many others. Of course this was a long time ago and you may be wondering if he can produce an album today with as much ability as he had the. The live energy the band is capable of seems to be recaptured here, due to the guitars, bass, vocals and drums all being mixed with the clarity thrash bands need when representing themselves aboveground. This helps the band’s thrashier sections and the transitions to slower mosh parts. Fast or slow, many of the guitar progressions are jammed full of notes, so each note needs to be sharpened so it doesn’t sound like a blur. I remember albums that had potential and were marred by bad production; perhaps if that had happened less often there would have been less pressure for bands to tone down the aggression and write mainstream friendly, and there would have been fewer bands ripping off Metallica’s sound, in the late 80s. Machinage on Slave Nation have more in common with Megadeth and Dickinson-era Iron Maiden in that the arrangements are streamlined to impact the listener up close and personal rather than bludgeon with blunt force. The clean production allows for the band’s classical influences to shine. This likewise helps the lead guitar harmonies that show up on many of these tracks, as well as the attention the band pay to crunch; the latter is designed to convey the controlled energy that has made thrash appealing since the first bands surfaced in the early 80s. The acoustic parts are given a balance and a striking contrast with the heavier guitars. If you listen closely to this album you’ll see much potential for growth has been achieved. -Dave Wolff