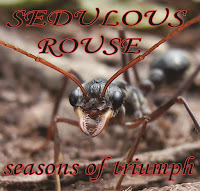 SEDULOUS ROUSE
Seasons Of Triumph
Cement Injection Records
http://www.facebook.com/Sedulous-Rouse-346645445441083/
As revealed when I interviewed them in December of 2015, Adelaide, Australia’s Sedulous Rouse consists of ex-members of local bands Murder Hill, Cloth Tape and Blood Mason. Some of their releases can be acquired from founding member/manager Roly Moore if you read that interview and have any inquiries. Seasons Of Triumph is the first album recorded by Roly, Dani and Brendan. The symbolism suggested by front and back cover photos of insects is a thought-provoking representation of their muic. While ants and flies are small compared to humans and scientific curiosities to be studied, they are not to be trifled with in the insect kingdom. It reminds me of the 1986 remake of The Fly that mentions there are no insect politicians; insects are brutal, without compassion or conscience. Members of the insect kingdom would likely be the only survivors of a nuclear holocaust and its descendants would inherit the earth. If you think about it, the concept fits Death Shall Rise, with its time tested theme of greed leading to downfall. The difference here is the emphasis on hope for the future once the apocalypse runs its course. Many bands are more concerned with letting people know where we are headed. The soundtrack to their concept is oddly arranged thrash with drum fills, bass slapping, some hardcore in the vocals and a hint of 80s Voivod. Harsh and tightly structured, it almost sounds like a futuristic setting that is being encroached upon by small insects like those shown on the covers. Many of the lyrics are of a personal, introspective nature of one sort or another, as on Perpetrator, Enemies, Without Sympathy and From Her To Modernity. The songs are often hypnotically repetitive and take unexpected turns to places not common for bands influenced by 80s thrash. But as with most worthwhile bands, these arrangements open you to new possibilities as to where we can go with underground music as opposed to merely incorporating more melodic or mainstream friendly elements. -Dave Wolff

Track list:
1. Death Shall Rise
2. Perpetrator
3. Enemies
4. Silent Man
5. Funk Til Ya Jazz
6. Without Sympathy
7. Prickles Pickles
8. From Her To Modernity