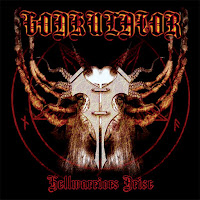 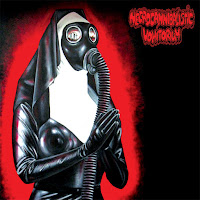 http://www.facebook.com/gonkulatorofficial
Charlie Infection and I go back to the first print issue of Autoeroticasphyxium, for which I interviewed him for Gonkulator. In those days I was arranging interviews with bands and zine editors I met at shows and through snail mail correspondence. I came into contact with Charlie when his black metal/grind/noise outfit Gonkulator played the Spiral with the New Jersey black metallers Abazagorath and a few other bands. If I remember correctly the show was arranged by the staff of Endemoniada zine who booked quite a few shows in the 90s, including the Black Mass of 1997 at The Bank. My review of it for Good Times can still be read at Endemoniada’s old website I think. I also recall he was GG Allin’s drummer on Freaks, Faggots, Drunks & Junkies, as his band Psycho was GG’s backup ensemble (as Bulge). Fast forward to today and Gonkulator are still actively recording and promoting material through Infection Distro. Their spilt seven inch release with Ukraine’s Necrocannibalistic Vomitorium was released in 2015 and is a prime example of how underground networking has remained unaffected by the gradual homogenization of the music industry. These two bands are pure cacophony, definitely not for the fainthearted. The two songs by Gonkulator and the three songs by Necrocannibalistic Vomitorium sound recorded live during band rehearsals, which for the purposes of this release contributes to the rawness and intimacy that many bands seek to put across on split releases like this one. I’ve heard several releases with this kind of sound and always felt I was there as the band were rehearsing or playing a small, intimate club. That is the sort of feeling you get from hearing these songs. You perceive the energy output from the stage and the jostling bodies. Even with its rawness, you can hear each instrument clearly enough as opposed to everything being just a blur. These qualities give the split an honest feel all around; it’s in no way like a band whose founding members are practicing in their rich parents’ home or trying to pass themselves off as a garage band. -Dave Wolff