CD review: BLASPHERIAN Allegiance To The Will Of Damnation by Dave Wolff 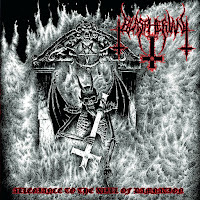 BLASPHERIAN
Allegiance To The Will Of Damnation
Blood Harvest
Crushing, sacrilegious death metal from these Texans who have been active together since 2004. I am reminded of old Blasphemy; specifically the first time I listened to Fallen Angel Of Doom. The production is different but the motif is similar. The atmosphere here suggests the monsters you suspect lurking behind the scenes might be real. This is what first struck me about Blaspherian; the early 90’s feel, that mystery and foreboding you perceive from horror in which ancient forbidden rituals are performed in isolated castles. I remember the vibe from albums like Beherit’s The Oath Of Black Blood and Mystifier’s Wicca. I also should note Allegiance To The Will Of Damnation is among Blaspherian’s earliest releases from 2007. They have since appeared on some splits and compilations, and released a full length recording. This EP has been in my possession for a while; I don’t even remember who mailed it to me but I finally got a chance to check it out. Die Todesrune Records re-released this in 2008 with two bonus tracks and a live video from Houston recorded in April of 2007. In 2010 it was re-released a second time by Deathgasm and in 2013 it was re-released yet again by Death Division Rituals (a limited edition of 200 copies). The first release of Allegiance contains five tracks and a brief introduction sampled from the movie Omen III: The Final Conflict. The Omen trilogy is a favorite series so it’s a plus to hear Sam Neill’s soliloquy as the son of darkness in his private chamber. The intro sets the tone for the tracks that follow, which personify a hellish soundtrack to lyrical blasphemy leaving no room for doubt as to the band’s position on organized religion. In many places there’s a mid 90s feel with the deeper aspects here, with traditional crunch and double bass. Morbid Angel would be an obvious comparison, but the occult themes added provides a fitting balance just when they’re needed to come to the surface. -Dave Wolff