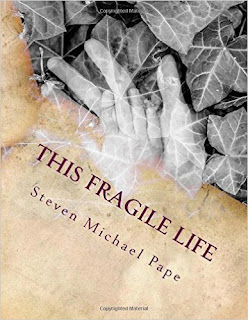 STEVEN MICHAEL PAPE
This Fragile Life
CreateSpace Independent Publishing Platform; 1 edition
I’ve either reviewed Steven Pape’s poems or interviewed him about them since his first collection was published. So I would say I am more or less familiar with his approach to writing. The thirty poems collected for This Fragile Life are his latest, described by Roseanne Terranova Cirigilano as representing “memories of the old passed on to the innocence of youth.” From one viewpoint this can suggest the old experiencing a sort of rebirth communicating with the new. The first poem Awake suggests the old emerging from a long period of time characterized by demons, though it’s ambiguous at explaining what those demons were. Whether the speaker couldn’t recall what he awoke from or blocked it out is unclear, but a sense of starting over sets the tone of this collection and grabs your attention right from the beginning. Imagery from his previous collections is here, only it’s more introspective and speaks of being viewed through innocent eyes. The Quiet Makes The Loudest Noise drew me in; for its lyrical simplicity it implies profound loss just underneath what appears to be a quiet nighttime setting. Pape wrote me that this poem is about children sleeping and how the quiet around them seems strange. There are people sleeping in this setting, and you start to wonder if they are sleeping to forget something too devastating to think about. You get similar impressions from Dead End Street, Always Remember, House Of Lost Souls and Broken Jigsaw Pieces. All of these show vast improvement in how Pape captures his thoughts. His subtlety invites you to explore his world in a way I didn’t expect this time. The impressions of loss and its impact on the people he writes about (who you never meet face to face) is presented as a warning of what lurks beneath an otherwise pleasant looking surface. Still, those happier pictures are prevalent throughout the deeper depths of pain and longing for lost innocence, leaving it to the reader to decide what is fragile about life as the title of this collection states, and what aspects of existence remain in the end. -Dave Wolff
Posted by Dave Wolff at 7:04 PM