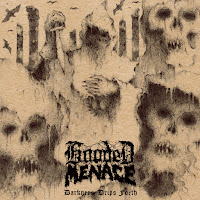 HOODED MENACE
Darkness Drips Forth
Relapse Records
http://www.facebook.com/HoodedMenace
Hooded Menace has managed to keep themselves at the forefront of the Death/Doom genre for a few years now. Their latest offering, Darkness Drips Forth, sees the band continue to push themselves and the genre forward. If you're familiar with any of their previous work, you will know that the band thrives on the power of atmosphere and achieves this through the power of the almighty riff. In Death/Doom sometimes it is easy to kind of blend in with the rest of the pack, and sort of be forgotten, but Hooded Menace has done a great job of setting themselves apart. There has always been elements of horror, the macabre, and some of the more common mainstays of the genre in their music. However, these things tend to serve the collective vision of where the band is going while looking forward instead of just backwards. Rather than revisiting and rehashing the same old same, Hooded Menace has managed to take some of what's been done before and combine it with their own inspirations and aspirations which results in a fresh and exciting take on this style of music. At the same time, they don't seem content to settle with the path paved by the footsteps of those that came before them. Instead, they are intent to carve their own path, and leave their own mark. The bottom line is they can write a damn good song. This is especially evident on the new release, Darkness Drips Forth, both in the way it is crafted, and in the way it unfolds like an apocalypse slowed down to a crawl. A long, twisting, turning, absolutely punishing crawl. Imagine the experience of watching the end of the world. Now imagine that same experience at half the speed. I think you get the idea, but essentially what I'm saying is that this album doesn't drag on or drag out. Rather, it seems to blossom and bloom, and grow, and evolve as it twists and turns the listener through the depths of whatever darkness is pulling them through. I think the secret weapon in Hooded Menace's case is their understanding of melody. It has gradually crept into their music more and more seemingly with each release, but it's not melody in the typical sense you may think when you hear that word. Some Death or Death/Doom fans hear the word melody and they turn into the kid in the class with the peanut allergy. This is not melody in the modern Paradise Lost sense. This melody doesn't detract at all from the Death, Doom, evil, or heaviness you would come to expect from Hooded Menace. In fact, it adds a whole other depth to those things, and it sets them apart from their contemporaries because it is executed so masterfully. You are going to want to listen to this one more than once, and just really lose yourself in it and take it all in. There's four tracks clocking in at close to 10 minutes or more each, but you really need to just press play and listen to this whole thing front to back to get the full experience. I still listen to this and hear things I didn't catch the first, second, or third time around. 9 out of 10. -Alan Lisanti

Tracklist:
1. Blood For The Burning Oath/Dungeons Of The Disembodied
2. Elysium Of Dripping Death
3. Ashen With Solemn Decay
4. Beyond Deserted Flesh
Posted by Dave Wolff at 10:43 AM