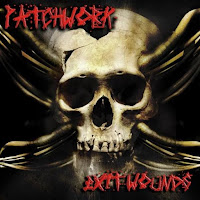 PATCHWORK
Exit Wounds
Turkey Vulture
http://www.facebook.com/PatchworkScars
As the debut from this Illinois band, Exit Wounds shows Patchwork at a good start. Patchwork formed in 2010 and released this in 2015. The overall motif is similar to 2000s Anthrax, with clean production, a tight drum sound and lead themes akin to Slayer and Iron Maiden. While this combination has likely been done countless times, Patchwork avoid making it sound generic or predictable. The introductory instrumental In The Shadow Of Death features a circus-like theme recorded with reverb to provide atmosphere. This theme gives way to a brief solo and reverts back. Separate tracks may have made the desired effect stronger but the intro makes its point. I feel placed in the proper mood for this CD when Lazarus gets underway. The verses and choruses feature a mid-tempo vibe flavored with occasional outbursts from the guitars. The pace quickens to a thrashier parameter for the guitar solo, returning to the mid-tempo attitude. Dead To Me takes the best aspects of Anthrax and Maiden adding some classic Black Sabbath in strategic places. From that point on the band seem to increase the intensity of their playing while paying loads of attention to more lead themes made even more circus-like from the dual harmony treatment they are given. Further worth mention is Lessons In Tragedy with its somber ballad intro offering promise for still more intensity. This intensity comes in the form of a relentless thrash section that continues until the fade out. I would say this is my favorite track from this album. I can find few flaws with this release; one of the few is that the drums could have been mixed in with just a little less volume as they were beginning to distract from the musicianship. Life And Death makes up for this with its buzzsaw guitars, pounding double bass and Kirk Hammett-esque solo, as does Blind To Fate with its opening Egyptian theme. What I most appreciate about Patchwork is their ability to take frequently used aspects of metal and thrash, revitalize them and add to their appeal. -Dave Wolff