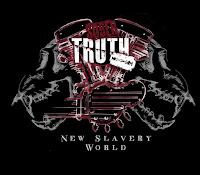 SOBER TRUTH
New Slavery World
Independent
http://www.facebook.com/sobertruthband
http://www.youtube.com/SoberTruthBand
New Slavery World is the fourth release from Sober Truth (following 2010’s Riven, 2014’s Outta Hell and 2014’s Outta Hell Special Edition, all available for streaming at their Bandcamp profile). The German band puts a twist on melodic groove-thrash that’s apparent from the EP’s first track Black Demon. The mood of this song is established with the sound of an old vinyl record crackling from dust buildup accompanied by a brief piano intro. On the heels of this comes lyrical pictures of insanity and psychosis which can be felt in the four vocal styles they are recited with. The chorus particularly conveys these impressions with its tortured vocals, next to the Peter Steele-like vocals in the bridge. The experimentation Sober Truth pursues helps break the groove-thrash mold, and this doesn’t even take into consideration the maniacal laughter intended to represent the demon this song is written about. If more groove-thrash bands wrote like this or took similar chances it would do the genre much good. The band took chances with the subject matter when writing the lyrics, which is equally fortunate. A promotional video was filmed for Black Demon which can be viewed at their Youtube channel. The setting chosen for it adds a new dimension or two. The other four tracks here are more or less standard. But the pre-track samples and vocals carry things far. There are lots of inventive riffs and the band’s drummer is quite capable when it comes to using double bass to enhance the relentless guitars. At the band’s Youtube channel are several more promotional videos and live clips. -Dave Wolff