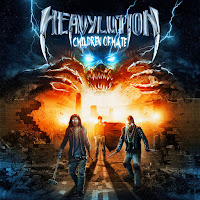 HEAVYLUTION
Children Of Hate
Brennus Music
http://www.facebook.com/heavylution
Children Of Hate is this French power metal band’s debut full length which has been out since February of last year, following their 2008 six song demo Metal Is Our Blood and 2013 six song EP The Architect. I gather the eleven tracks are unified by a post-apocalyptic and dystopian concept, from the Nineteen Eighty Four reference in the title track. The lone guitars introducing The Call presents an impression of a deserted city of crumbling buildings and abandoned cars, and maybe thick radiation contaminants in the air. A picture not unlike the bleak alternate universe depicted in Stephen King’s recent novel 11/22/63. As the title track begins you are introduced to the mutated inhabitants of this destroyed city as they make their presence known. In the distance you can see the totalitarian society they are railing against. Each song that follows takes you deeper into the urban ruins; at least this is what I gather. You are treated to many precise guitar solos and engaging harmonies as vocalist/guitarist Paul Eyesette emotes in a style comparable to Bruce Dickinson of Iron Maiden (it’s a long shot comparison as few vocalists can approach his range but he was the first vocalist to come to mind). The front cover bears something of a resemblance to Iron Maiden’s Brave New World, though I’m unsure whether this is intentional or not. It may only be my own perception. Anyway, the guitar harmonies seem to be an integral part of their song structure; they push the bridges and choruses on, demanding your attention as they draw you even further into the progressions unfolding around them. Check out Spirit Never Dies, Mind Avulsion, The Eye Will Control and The Exodus with its equally intriguing riffs and you’ll see how important the guitars are to the band’s sound. As I have an affinity for epic songs I give special mention to The Future Is On Your Side which offers a ray of hope amidst all the darkness and destruction we’ve heard up to now -Dave Wolff