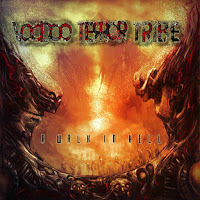 VOODOO TERROR TRIBE
A Walk In Hell
Independent
http://www.facebook.com/vttrocks
My first introduction to Voodoo Terror Tribe was when I saw them at CBGB sometime in the mid 2000s. They has a different vocalist back then and were a basic neo-thrash/metal band. I remember their song World Of Lies which displayed one of their earliest efforts to expand as musicians and a collective. Forward to this past year when I saw them with Demon Boy at Haunt Faire 2015 and got to experience how much their sound has evolved. This five song EP released in 2014 is a small sample of the varying sounds and influences the band have assimilated into their formula after ten-plus years. An initial description would be electro-industrial-cyber-thrash metal, but this is only an infinitesimal taste of their capabilities. More importantly the songs don’t sound forced in any manner, nor is the band making a superficial effort to demonstrate how “open minded’ they are, which too often can come across as pretentious and insincere. The different aspects to each selection fit well together when they need to, and no two tracks sound exactly the same. If one song calls for more thrash, another calls for more industrial-techno, and another calls for more atmosphere and melodic vocals, that’s what goes in there. What most speaks to me is the balance created between heaviness and metallic coldness, as if the universes of Blade Runner and Escape From New York were somehow amalgamated and the vampires from Blade were running around feeding on unsuspecting humans. From beginning to end, the first song to the last, you consistently have something new brought to the table. Screaming Dreams starts the EP with a keyboard progression that goes into heavier territory and in turn turns toward an odd verse progression, later featuring atmosphere and guitar harmonies. Just from this song you can tell the band put a lot of work into doing unexpected things with their songs. The track plays like a nightmare of varying moods and when it’s over you feel you’ve been through a long journey. Other examples of the band’s diversity are their post apocalyptic cover of Billy Idol’s Rebel Yell and the straightforward death metal of Bloodsoaked which is as much of a surprise as anything else they throw at you on this release. -Dave Wolff